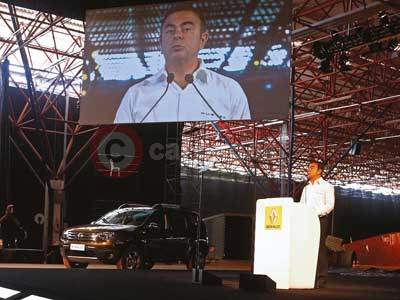 While visiting Renault's plant in Curitiba, Carlos Ghosn has announced that production capacity will be increased by 2013, with an additional 100,000 vehicles per year, taking annual capacity to over 380,000.

The production capacity increase will allow Renault to achieve its ambitions in Brazil. Renault has a target market share of 8% by 2016.

Brazil, alongside India and Russia, is one of Renault's three priority markets in the "Renault 2016 - Drive the Change". Brazil was the Group's third largest market for the year to end August 2011, behind France and Germany, it was the second largest in July and August.

Carlos Ghosn, President and CEO of Renault stated: "In 2011, Brazil is set to become Renault's second-largest market. Brazil is one of the cornerstones of our international growth strategy: more than one-quarter of the growth in volume will come from Brazil. If we are to reach this target, then we must increase our manufacturing capacity, and we have chosen our Curitiba plant to achieve this."

The annual passenger car and LCV production capacity of the Curitiba plant currently stands at more than 280,000 vehicles. By early 2013, this will have increased by 100,000 vehicles following the signing of the agreement signed by Renault and the Parana government. 500 million Brazilian reals will be invested by Renault to include new systems and an extension of the assembly line.

The investments also allow for the creation of a genuine engineering centre close to the production plants. Currently, the engineering personnel and establishments (Renault Technologies Americas – RTA) are spread around the industrial complex. Renault Brazil will open a training centre and new logistics centres, creating 1000 new jobs in addition to the 1000 already created in 2011, bringing a total increase to 2000 by 2015. Renault has three plants in the Ayrton Senna complex at Curitiba: a passenger car plant, an LCV plant and an engine plant. Brazil exports vehicles to the other markets in South America.