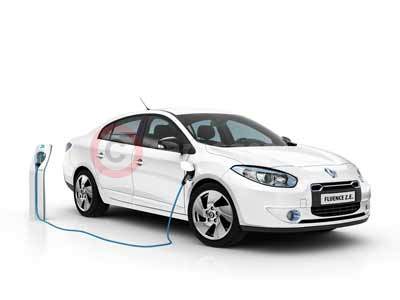 Between 8th and 11th September 2011, the Renault Fluence Z.E. saloon will have its first public show at EcoVelocity.

The five seater electric car will be on show alongside Renault Kangoo Van Z.E. throughout the eco motoring festival. Test drives around the dedicated show circuit will be available in two Renault Fluence Z.E. and one Kangoo Van Z.E. with Renault EV specials to answer questions.

The four door Renault Fluence Z.E. saloon will go on sale during the first half of 2012 with a starting price of £17,850 after the Plug In car Grant of £5000. Renault's battery hire model via RCI Financial Services is available for the Fluence Z.E., costing from £69.60 per month including VAT, based on 6000 miles per year and a 3 year agreement.

Standard equipment on the Renault Fluence Z.E. includes 16” alloys, auto lights and wipers, climate control, cruise control, ecoMeter and Carminat TomTom smart satellite navigation. The car is powered by a 70kW (95hp) motor delivering 226Nm torque with a range of up to 115miles.

The Renault Kangoo Van Z.E. is the first electric can produced by a mass-market manufacturer. Available in two-seat Van and Maxi guise or five seat Crew Van with a starting price of £16,990 excluding VAT. Monthly battery hire is priced from £62 per month based on 9000 miles a year and a four year agreement.

The Renault Kangoo Van Z.E. is designed for businesses with collection and delivery journeys in rural, suburban or inner city situations with a capacity ranging from 3m to 3.5m3 and a payload of 650kg.

Information will also be available on the Renault Twizy two seater and ZOE supermini electric vehicles.

Andy Heiron, Renault UK's Head of Electric Vehicles, said, "Renault is the only manufacturer to offer a full range of affordable electric vehicles. With our first Z.E. due to hit the UK’s roads in a matter of weeks, we're delighted to be showing off two of the family at EcoVelocity, so that people can see, touch and drive what we believe is the start of a new era in motoring.

"We're sure that everyone who gets behind the wheel will agree with many motoring journalists and industry experts who have rated the performance, space and lack of noise very highly on both models."