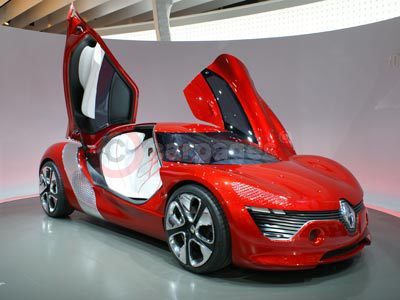 The Renault DeZir concept and the next Renault Clio have more in common than might be apparent.

The three-part grille is the new face of Renault. "I think you can take the Renault diamond out of the grille and it is still recognisable as a Renault. I don't think a VW badge would fit in there."

The new Renault Clio will also have some of the distinctive curves and waves that make Renault DeZir so eye-catching, he said.

Van den Acker arrived at Renault from Mazda at a time Renault was ready to change its design direction.

The Renault DeZir, unveiled at Paris show last year, was the first concept under his command. "It did a lot of good internally, boosting morale," he said. For him the Renault DeZir is like Alfa Romeo's AC concept with Renault Clio equivalent to Alfa's Mito. "You can see they are part of the same family."

The Renault DeZir along with the Renault R-Space and Renault Captur concepts unveiled at Geneva, point to the new direction for the Renault family, he said.

He wants to make Renault more Latin while stablemate Dacia becomes more Nordic and more robust in its design.

"The next generation Clio and Dacia Sandero will show how we are moving the brands apart," he explained.