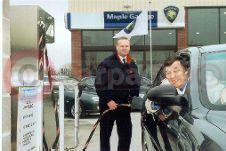 The Proton Impian has become the latest addition to the ground-breaking green fleet of dual-fuel patrol cars and specialist vehicles operated by Humberside Police.

The Hull-based constabulary set the trend in green fleet management when it began the process of converting police cars to run on LPG as well as petrol five years ago.

With a fleet of over 270 Humberside Police vehicles now converted to dual-fuel, the environmental and running cost benefits provide a convincing argument for the government’s PowerShift initiative in all sectors of the fleet market.

Annual budget savings of £200,000 are being achieved by this police force through conversion to LPG, money which is fed back into front line policing duties to directly benefit the public.

Benefits to the environment are equally significant. LPG emissions contain 75 per cent less carbon monoxide and 85 per cent less hydrocarbons than petrol, while similar comparisons with diesel fuel show savings of 90 per cent.

Humberside Police has put 10 Impian 1.6 saloons into service with its specialised unit. These cars join an existing fleet of 120 Proton Wira saloons already used by the force for a variety of duties, including covert policing and patrol work.

All can be switched instantly by the driver from petrol to liquefied petroleum as without any significant loss in performance. Not only is LPG around half the price of petrol and diesel at the pumps. The dual-fuel resource effectively doubles the mileage range of every car converted.

Proton was among the first marques to supply cars for Humberside Police’s conversion programme. The Wira fleet has consistently returned lower running costs than competitors’ vehicles.

“A combination of low running costs and plenty of space in the Wira’s boot for police equipment in spite of the space taken up by the LPG tank has worked well for our force”, says Humberside Fleet & Supplies Manager Allan Hocking, “and with a larger 15.5 cubic feet boot and a combined fuel economy figure of 42 mpg from the Impian’s engine, this new model has even greater potential”.

The status of Proton’s latest offering as a high value alternative in the upper-medium saloon sector to mainstream cars from the volume manufacturers has also been recognised by the motor trade price gurus at Glass’s Guide.

The top-spec Impian 1.6 X – with leather upholstery and automatic climate control – will retain 66 per cent of its list price (£13,000) after one year, according to Glass’s, compared to 64 per cent for the Ford Mondeo1.8 Zetec, widely regarded as the benchmark in the Upper D sector class.

This is a 19-year+ news article, from our Proton archive, which dates back to the year 2000.

If in doubt check with your local Proton dealer as car prices and technical data will have changed since 2002.

Proton Images may not be UK specification cars. Colours and exterior and/or interior elements may differ from actual models.