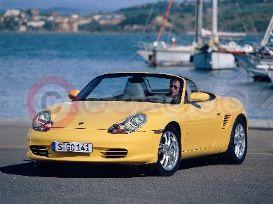 The award-winning Porsche Boxster and Boxster S have evolved for the 2003 model year. The roadster will now offer improved performance by boasting more power and improved aerodynamics, as well as a heated glass rear window and interior refinements.

The Boxster's 2.7 litre flat-six engine now develops a maximum output of 228 bhp (up from 220bhp) at 6300 rpm, the 3.2 litre engine of the Boxster S boosting maximum output to 260 bhp (up from 252 bhp). Both roadsters also offer even quicker acceleration from 0-100 km/h (62 mph); the Boxster takes just 6.4 secs and the Boxster S only 5.7 secs, each reducing their sprint time by two-tenths of a second. Despite these performance improvements, fuel consumption has been reduced by two per cent thanks to new VarioCam technology increasing engine power whilst reducing both fuel consumption and emissions. Both models also benefit from a "beefier" torque curve with 260 Nm and 310 Nm available, in the Boxster and Boxster S respectively. Porsche engineers have also retuned the exhaust note to maximise the characteristic flat-six sound.

The Boxster's aerodynamics have also been refined to reduce lift and improve the flow of cooling air. At the nose the discreet refinement takes the form of two newly designed side air intakes with greater curvature on the outer flanks. The reduction in the swept-arrow shape of the front end serves to reduce lift over the front axle as well as improving the flow of cooling air. The third cooling air intake in the middle remains, as in the past, the characteristic front-end feature of the Boxster S.

The rear of the Boxster has a completely redesigned spoiler that blends in harmoniously with the shape of the body when retracted. The rear spoiler moves up automatically at a road speed of 120 km/h or it can be manually deployed by the driver at any speed. It efficiently reduces rear axle lift and the effect of the rear spoiler is further enhanced by the cleaner flow of air over the new modified roofline.

The roof now moves down to the rear boot at a steeper angle and this different shape is created by a new fourth roof bracket supporting the fabric directly above a new heated glass rear window. This new glass rear window comes with electric heating not only improving visibility to the rear but also motoring comfort in cold and wet weather. Even with this new bracket and a glass rear window, the roof still only requires 12 seconds to open.

Restyled Rear With Function In Mind

The rear of the car now has a clear coloured indicator light cluster coupled with redesigned exhaust pipes on the Boxster (one oval pipe) and the Boxster S (twin pipes). The rear has also been restyled with two striking contour lines that lower the car visually, as well as providing an improved exchange of the air heated by the exhaust system through the new vents directly above.

To improve airflow directly into the engine and the engine compartment, the side engine intakes have been modified to draw in more air than previously. To provide this beneficial effect, Porsche engineers have improved flow behaviour by moving the air scoop grids finished in body colour further to the front, where they are now flush with the body of the car.

The 17 inch light alloy wheels newly developed for the Boxster (standard on the Boxster S) and the 18 inch light alloy wheels from the 911 Carrera serve to significantly reduce the unsprung masses and, as a result, improve both ride quality and handling. In their design, the wheels consistently follow the principles of lightweight construction borne out in particular by the very narrow spokes. Compared with the previous Boxster wheels, the new 17-inch wheels are two kilos lighter. The 18-inch wheels in turn weigh 10.8 kilos less, equal to a reduction in weight of 22.1 per cent.

The model year 2003 Boxster and Boxster S will be available in the UK market from September 2002.

This is a 18-year+ news article, from our Porsche archive, which dates back to the year 2000.

If in doubt check with your local Porsche dealer as car prices and technical data will have changed since 2002.