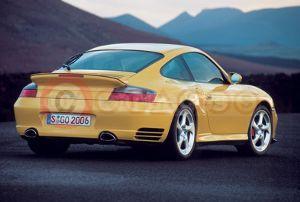 Intelligent air-flow management makes the 911 Turbo a leader amongst the ranks of the supercars in terms of its drag co-efficient. Despite its wider body and increased air cooling requirements compared with the rest of the 911 Carrera range, the Turbo has a Cd of just 0.31. Its ability to cleave cleanly through the air is matched by the high speed stability created by its aerodynamic set-up.

VarioCam with a Plus

In this latest development, the Porsche VarioCam intake-side camshaft adjustment is accompanied by an intake-side valve lift changeover system in the 911 Turbo. This new system is called VarioCam Plus, and is now also fitted to the normally-aspirated engines of the recently revised 911 model line-up. The valve lift adjustment system comprises two variable-position bucket tappets placed one inside the other on the intake side of the engine, and actuated by cam lobes of different sizes on the intake camshafts. By altering the engine’s breathing to suit the prevailing operating conditions, VarioCam Plus is able to provide optimum power and torque, while at the same time improving fuel consumption and lowering emissions.

Measured in accordance with EU standards, overall fuel consumption of the 911 Turbo is 18 per cent lower than that of its predecessor - 21.9mpg (12.9 litres per 100km). Equally praiseworthy is an average 50 per cent reduction in emissions according to the European approval procedure. As a consequence, the 911 Turbo has no trouble complying with the tough D4 emissions limits, which in standard test conditions are equivalent to the stringent EURO 4 limits that do not come into force until 1 January 2005. Naturally, the 911 Turbo also complies with the extremely stern LEV standards in the USA.

Four-wheel drive - for safety and for fun

The 911 Turbo’s four-wheel drive system is similar to the set-up in the Carrera 4. But in this instance the focus is not so much on improved traction, but on supreme driving characteristics and safety at the limit. The active safety offered by the Turbo is enhanced considerably by Porsche Stability Management (PSM), fitted as standard. This combination of four-wheel drive, PSM and lowered (by 10mm), finely-tuned suspension, guarantees not only unprecedented levels of active safety on the road, but also the highest levels of driver enjoyment.

Tiptronic S available on Turbo for the first time

The 911 Turbo is the first ultra-high performance 911 to be available with the option of Tiptronic S transmission. This five-speed automatic gearbox allows the driver manual operation via toggle switches on the steering wheel, and its programming has been tailored specifically to the high power and torque outputs of the turbocharged engine. The shift programmes adjust continuously to the driver’s particular style of driving and to the prevailing conditions (fast A-roads, winding B-roads, etc).

Over and above the generous levels of equipment carried over from the Carrera models, the Turbo is supplied with metallic paint, a wide range of leather upholstery choices, electrically-adjustable seats complete with a position-memory on the driver’s side, and a new high-end Bose sound system. Further features include bi-xenon headlights, anti-dazzle interior and exterior rear-view mirrors, and an integrated rain sensor for the wipers.

This is a 19-year+ news article, from our Porsche archive, which dates back to the year 2000.

If in doubt check with your local Porsche dealer as car prices and technical data will have changed since 2001.