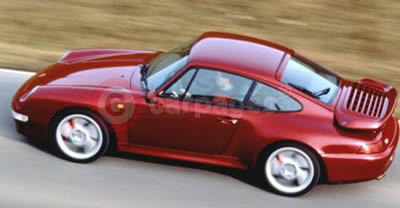 Upon its launch at the Paris Show in 1974, the Porsche 911 Turbo set new sports car standards. Fitted with a new, turbocharged 260bhp 3.0-litre version of the company’s air-cooled flat-six engine, the original 911 Turbo had a top speed of 155mph and was for a long time Germany’s fastest road-going sports car.

Throughout the subsequent three decades, the 911 Turbo has been subject to an ongoing process of development. To this day, the combination of acceleration, dynamic performance and braking power offered by the current 911 Turbo continues to set the model apart from its peers. Now featuring a twin-turbocharged 3.6-litre, water-cooled version of the classic flat-six engine, maximum output of the latest 911 Turbo S is 450bhp and the top speed is 190mph. Of course, since the 1994 Model Year, the 911 Turbo has also featured all-wheel drive, in the interests of optimised cornering grip and enhanced stability.

Porsche has proved the durability of its Turbo technology in motor sport. The lineage can be traced back to the phenomenal turbocharged, 12-cylinder 1100bhp 917/30 Can-Am racers of 1973. However, the record of achievement behind the flat-six engine is equally impressive. Victories in the Le Mans 24 Hours in France have been achieved by charismatic models such as the 935 and the dominant 956/962 Group C racers, and most recently by the 911 GT1 in 1998. Right up to the present day, Porsche continues to play an active role in international motorsport with the turbocharged 911 GT2 model.

The latest Porsche 911 Turbo and Turbo S, in combination with the new 997 generation 911, represent the strongest 911 line-up yet. And the outstanding performance, supreme acceleration and superior luxury as well as the impressive quality and lasting value that distinguish all Porsches - and the 911 range in particular - are set to ensure the 911 Turbo will continue to lead the field for many more years.

If in doubt check with your local Porsche dealer as car prices and technical data will have changed since 2004.