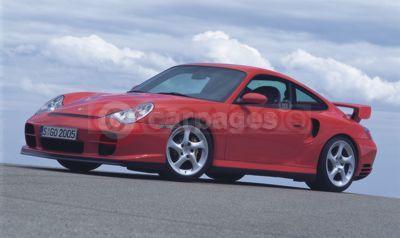 The quickest 911 The GT2 is the fastest, most powerful series production Porsche 911 to date. Its performance is supreme – 0 to 62mph (100 km/h) in just 4.1 seconds. The ferocity of the 911 GT2’s acceleration continues barely diminished all the way to its 196 mph (315 km/h) top speed. Around the northern circuit of the famous Nurburgring, a stern test not only of outright performance, but of handling, road holding and braking, too, the 911 GT2 outperforms even the 911 GT3, beating its sibling’s lap record of 7min 56 sec with a time of 7 min 47 sec.

The 3.6-litre flat-six of the 911 GT2 is a high performance evolution of the biturbo powerplant in the 911 Turbo. Peak power increases by 10 per cent to 462 bhp (340kW), developed at 5700 rpm. In part this is due to an even higher airflow through the twin turbochargers which allows a rise in charge pressure under full load to 2 bar. As impressive as the power output is the torque – 457 lb ft (620 Nm) which peaks at a commendably low 3500 rpm and remains constant until 4500 rpm. These prodigious engine outputs are fed through to the rear wheels of the 911 GT2 via a six-speed manual gearbox.

High power, low weight The focus during development of the 911 GT2 was extremes of power and performance, and this has been achieved not only through boosting engine output, but also by reducing weight. Weighing in at 3175 lb (1440 kg), the GT2 is 221 lb (exactly 100 kg) lighter than the 911 Turbo; this weight saving combined with the increased engine output gives the 911 GT2 an extraordinary power-to-weight ratio of 325 bhp per ton (4.23 kg per kW).

Dynamic excellence in all departments

Every aspect of the 911 GT2 has been fine honed to create the highest standards of performance, agility and driving enjoyment. Whether conditions involve lateral acceleration, load shifts through corners or in high speed lane-change manoeuvres, this extreme Porsche excels through its top levels of active safety. The factors behind this all-round dynamic excellence are many – enhanced aerodynamics for high speed stability, careful retuning of the suspension, and even modified wheel location, all contribute to creating one of the most complete supercar experiences on today’s roads.

This is a 18-year+ news article, from our Porsche archive, which dates back to the year 2000.

If in doubt check with your local Porsche dealer as car prices and technical data will have changed since 2002.