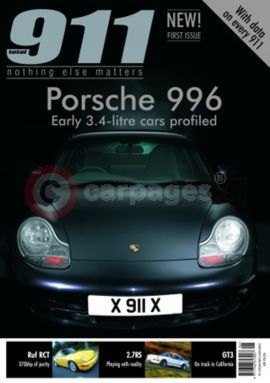 Hollyoaks director John Francas is in the driving seat of new magazine Total 911 - aimed at Porsche lovers across the world.

John, one of the names behind the lens of the hit teenage drama, has added a new dimension to his successful television career by branching into magazine publishing.

The publisher, who lives in Leeds, is no stranger to the media spotlight. His wife Yvonne produced the last two series of the comedy drama Fat Friends - created and written by his mother-in-law Kay Mellor.

John says: "I’ve always loved Porsches and magazines, so this was a unique opportunity to combine my two passions.

"It’s very exciting and readers from around the world have been giving us tremendous feedback for our first issue of Total 911.

"Issue two is going to be even better since we’ve teamed up with a promotions company to offer our readers the chance of winning a Porsche 911 for themselves in a prize draw."

There’s no denying that Total 911 is one of the hottest magazines to hit the shelves for years. The first edition, out this month, has been a runaway success, selling out in big stores and independent newsagents across the United Kingdom.

And the response from readers overseas has been fantastic with sales storming ahead in the States, Australia, Hong Kong and New Zealand.

Total 911’s delighted editor Philip Raby explained: "I’m thrilled by our readers’ response to Total 911 - they just can’t get enough of it."

Entry into the dream-making Porsche draw couldn’t be easier. All readers have to do is write to the magazine explaining (in under 100 words) why they ought to be the one who wins the dream car.

They then have the chance of winning one of ten free tickets that will then be entered into a prize draw.

Total 911 is the first magazine ever published which is purely dedicated to Porsche 911.

Philip, who also runs a national Porsche-finding service, added: "The 911 is the model that people are really passionate about. Even drivers who currently own other models just adore 911s which just have that certain appeal."