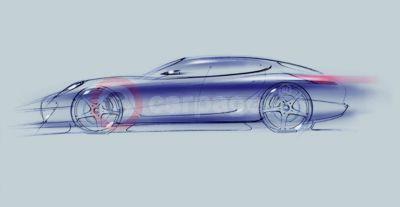 The Supervisory Board and the Board of Management of Porsche AG gave their go-ahead today for the development and production of a further Porsche model series, scheduled to enter the market in 2009. The new car is a premium class Sports Coupé with four seats and four doors, and will be powered by various engines. The power unit will be fitted at the front and will drive the rear wheels.

The fourth model series built by the Stuttgart car maker following the 911, the Boxster and the Cayenne will be called the "Panamera", a name derived from the legendary Carrera Panamericana long-distance race. Porsche's total investment in the new model series, including development, will be more than Euro 1 billion and will come entirely from the Company’s own funds. Expected worldwide sales are at least 20,000 units a year.

Dr Wendelin Wiedeking, the President and CEO of Porsche AG commented: "We have indeed taken a lot of time in making this decision. But now we know one thing for sure: the Panamera is the right car for Porsche, as it has all that typical DNA characteristic of a genuine sports car. In terms of performance, design, and driving dynamics it meets Porsche's high standards in every respect. Through this Sports Coupé we are making our customers an attractive offer in the top performance segment."

Wiedeking emphasised that Porsche will be developing and building the Panamera using the Company's own resources: "We will be developing a separate platform for our fourth model series in Weissach. There are no plans for a joint venture with another car maker. But to ensure the profitability of this new model series we will cooperate more closely than so far with selected system suppliers."

Production of the Panamera is to be in Leipzig, where Porsche already builds the Cayenne and the Carrera GT high-performance sportscar. The final decision will require further detailed talks at the plant, which will be held by the Board of Management of Porsche AG and the Management of Porsche Leipzig GmbH with representatives of the employees.

This would also require a major extension of the assembly hall, already in operation today, which would begin in 2006/2007. Should the site be chosen for production of the Panamera it would potentially create some 600 new jobs in Leipzig alone. In the course of the project approximately 400 more new jobs will be created at Porsche's original plant in Stuttgart-Zuffenhausen, where the engines for the fourth model series will be built, and at the Weissach Development Centre.

Porsche Panamera Images may not be UK specification cars. Colours and exterior and/or interior elements may differ from actual models.