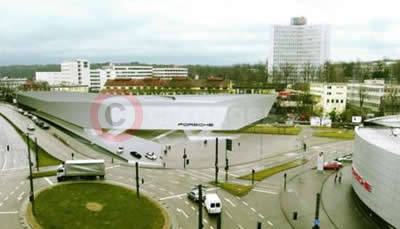 From 2007, Porsche owners and enthusiasts will be able to visit an outstanding new Museum, dedicated to the world-renowned sports car marque, which will be built alongside the company’s production facility in Zuffenhausen, Stuttgart, Germany.

One of the most spectacular projects in the history of the company, the design for the new Porsche Museum was chosen following an open competition, and the architectural firm of Delugan Meissl from Vienna, Austria, won the contest. A total of 170 European architect offices had made a bid for this project, and Porsche invited ten renowned architects from Germany, Austria and Switzerland to take part. The new Museum will be built on Porscheplatz, and construction will commence later this year. The cost of the new Porsche Museum, which is to be opened in two years’ time, amounts to approximately 50 million euros.

"The new Porsche Museum will create a space that will lend architectural expression to the company’s self-confident stance and high standards and will at the same time take account of Porsche’s vitality," explained Delugan Meissl. "Knowledge, credibility and purposefulness are as much a part of the philosophy as courage, enthusiasm, power and independence. Every idea is perceived as a chance to actively set oneself new challenges, sound out new frontiers and nevertheless remain true to oneself. All of this is to be reflected in this museum."

The selection committee, led by the architect Professor Fritz Auer (Stuttgart/Munich), comprised 13 judges and included Porsche AG President and CEO, Dr. Wendelin Wiedeking. Quoting from the selection committee’s decision: "Delugan Meissl’s proposal is impressive due to its attempt to redefine the Porscheplatz area. This is achieved in an urban sense by a sculptural gesture on a grand scale, and internally by the museum’s expressive setting. The exhibition space, which is terraced by long flights of steps, is recessed, and its circular design lends itself to beneficial flexible use."

"This design is innovative, modern and challenging," said Dr. Wiedeking. "It is sure to be provocative too, but that was also one of the aims. With this new development we will create an architectural highlight at our parent plant in Zuffenhausen, which will shine out well beyond the borders of Stuttgart."

Around 80,000 people visit the current Porsche Museum per year, but Wiedeking anticipates numbers arriving to review the new displays will rise significantly to over 200,000.

The Mayor of Stuttgart, Dr. Wolfgang Schuster, was also delighted with the result of the architects’ contest. "Following the Haus der Geschichte, the new art museum on Kleiner Schlossplatz and the Mercedes-Benz-Museum in Untertürkheim, we are now getting a fourth museum in the space of only a few years. The design from Delugan Meissl represents an attractive portal not only for Porsche, but for Stuttgart as a whole."

From 2007 on, the new Porsche Museum will be perceived as a detached and dynamically formed monolithic body, which appears to hover above the ground and the first-floor level. This body will contain the exhibition area of approximately 5,000 m² and create space for "Experiencing the Porsche Cosmos". The first floor contains the entrance area, which not only acts as a foyer and starting point for guided tours, but also allows interesting insights into the workshop for historic vehicles and the archive.

The foyer of the exhibition area contains the history of the firm up to 1948. From there, the visitor can move straight on to the main exhibition area - represented by the chronologically arranged post-1948 product history as well as the respective ‘theme islands’ (including, among other things, Targa Florio, Prototypes, The 917 Era, Le Mans and Evolution 911). Whereas some 20 historic vehicles can be displayed currently, the new Porsche Museum will allow the public to feast their eyes on around 80 vehicles.

The new Porsche Museum will also contain a shop, visitors’ restaurant, coffee bar and an exclusive restaurant with a large roof terrace. More than 300 parking spaces will be available in the underground garage. The building can also be used for large events, such as vehicle presentations, customer events or press conferences.