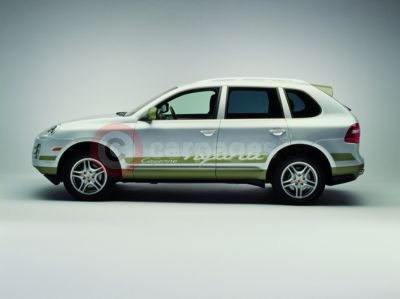 Porsche is presenting innovative drive concepts at the Los Angeles Auto Show - starting on November 16, 2007 - that demonstrate its commitment to alternative power sources, with the highlight being the first appearance in the USA of the Cayenne Hybrid prototype.

At the same time, Porsche is also displaying an earlier milestone in automobile development at the show; the electric-drive Lohner-Porsche from over a century ago, one of the world’s first zero emission vehicles and, accordingly, a forerunner of hybrid drive.

With its forward-looking use of electric motors in the wheel hubs, the Lohner-Porsche was an absolute sensation on the occasion of its world debut at the Paris World Fair in 1900. This outstanding achievement in technology is protected today as an automotive landmark by the Technical Museum in Vienna, Austria. The trip to Los Angeles marks the first time the Lohner-Porsche will have travelled outside of Europe.

It was this vehicle that gave the 24 year-old Ferdinand Porsche his breakthrough as a pioneer in the history of the automobile. In 1901, the addition of a petrol combustion engine directly connected to an 80 volt dynamo - -providing power for the electric drive system in the front wheels - created what is acknowledged as the first car with hybrid drive, and was a unique highlight at that year’s Paris Auto Show.

The Full-Parallel-Hybrid System developed by Porsche for the Cayenne prototype combines the best of two worlds so efficiently that the series production model will achieve fuel economy of more than 30mpg, as well as lower emissions. Porsche has taken a new approach with its V6 petrol engine and battery hybrid drivetrain in developing a parallel system rather than applying the established solution which branches output along various lines and in various directions via a planetary gearset. A parallel system features the electric motor and clutch integrated within the drivetrain, and this compact layout ensures greater compatibility with all-wheel drive technology and fewer compromises in terms of interior space. Equally important attributes of the hybrid model are to maintain the ambitious standards in vehicle weight and driving dynamics, which differentiate a Porsche from its rivals.

The Cayenne Hybrid will be available to customers before the end of this decade.

Also making its US debut at the Los Angeles Auto Show will be the new Porsche 911 GT2, together with the current Porsche range.