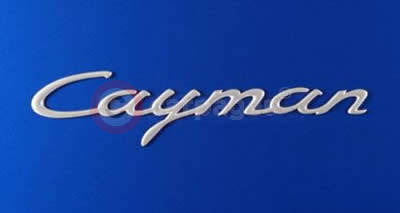 Later this year Porsche AG will be extending its range of sports cars through the introduction of another outstanding model. This new two-seater coupé will be based on the Boxster series but will be positioned in terms of performance and price between the Boxster S and the 911 Carrera. This positioning of the new model is also borne out by its six-cylinder boxer engine transmitting a maximum output of 295 bhp (217 kW) to the rear wheels.

As well as the characteristics and qualities typical of Porsche, this sporting two-seater will show outstanding style and superiority in its looks and appearance. The exceptional design of this car is further accentuated by its muscular design features, which convey a strong feeling of both power and agility. In addition, the new sports car not only fulfils the demands of Porsche customers in terms of sporting performance, but also in everyday practicality.

Reflecting its individual performance and styling, this new Porsche sports car will bear its own name: it will be called the Cayman S, thus ranking alongside the Carrera, Boxster and Cayenne model designations already so rich in tradition.

Introducing this name, Porsche is taking up a concept from the animal kingdom: the "Cayman" belongs to the crocodile family. Within this group of the world's largest reptiles, the "Cayman" is, however, a relatively small but very nimble athlete. The "Cayman" is acknowledged as a highly specialised hunter with strength and agility, quick reflexes and clear target orientation, a concept that not only embodies this new Porsche sports car, but also the Company as a whole.

The heart of the Cayman S is a new 3.4-litre power unit mounted midship in front of the rear axle. Benefiting from this mid-engine concept and an excellent power-to-weight ratio, the Cayman S is perfectly suited for the kind of performance so typical of Porsche: direct highly responsive steering and very dynamic handling. This new coupe will also be fitted with a class leading braking system allowing it to generate very high decelerative forces.

In summary, therefore, the combination of supreme power and performance in the Cayman S provides an unprecedented experience on the road: driving pleasure in its purest form.

A full technical specification, price and dates of introduction, will be announced after the official presentation of the Cayman S later in the year.

Porsche Cayman Images may not be UK specification cars. Colours and exterior and/or interior elements may differ from actual models.