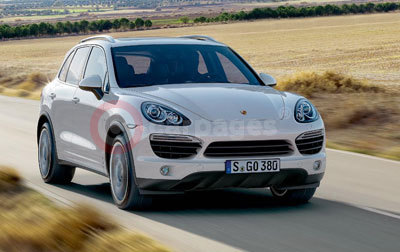 The new generation Porsche Cayenne will make its world debut at the Geneva Motor Show on 2nd March 2010. Each model in the Cayenne range is a trend-setter in terms of efficiency and output and, compared with the former models, offers an increase in fuel economy of up to 23 per cent with more performance.

The highlight of the new line-up is the technically sophisticated parallel full hybrid drive-train which combines the sporting performance of an eight-cylinder with the economy of a six-cylinder and a unique ‘sailing mode’ for even lower fuel consumption.

The selection of materials for optimum weight combined with changes in the overall concept of the Cayenne – such as a new active and extra-light all-wheel drive transmission – has resulted in the overall weight of the Cayenne S, for example, being reduced by 180kg. This weight reduction clearly has a very positive effect not only on fuel consumption and CO2 emissions, but also on performance, agility, and handling. Consequently, the breadth of new features and new technologies throughout the Cayenne ensures that it offers greater driving quality both on- and off-road, together with enhanced safety and passenger comfort.

The new Cayenne has been developed according to the principles of Porsche Intelligent Performance more power on less fuel, greater efficiency and lower CO2 emissions. Thisphilosophy is manifest in the introduction of a new Tiptronic S eight-speed automatic transmission featuring a wider spread of gear ratios, an Auto Start Stop function, optimised thermal management on the engine and transmission cooling system, on-board network recuperation, and intelligent lightweight construction.

Overall, the new Cayenne is 48 mm longer than its predecessor. But despite its larger exterior dimensions, the design language of the new generation Cayenne represents a more compact and dynamic style. The fresh design of the new model integrates the 2010 Cayenne into the Porsche range and the sporting character of the Cayenne is clearly obvious, just as the highlights in the shape and design of the car so typical of Porsche are also clearly defined.

Extra space inside and greater everyday usability is ensured by a 40mm longer wheelbase. The most significant feature within the brand new, high-quality interior is the rising centre console that extends to surround the gearshift selector and which gives the interior the typical Porsche ‘cockpit’ character. In the rear, the seat bench can move forwards and back by 160mm and the backrest angle has three different position settings.

No less than three of the five versions of the new Cayenne consume less than ten litres of fuel per 100 km in the New European Driving Cycle, and two models emit fewer than 200 grams of CO2 per km.

The Cayenne range starts with the 3.6-litre V6 petrol-engined Cayenne. Power has risen to 300 hp, but fuel consumption has dropped by a fifth – in conjunction with the eight-speed Tiptronic S automatic transmission – to 28.5 mpg Combined (9.9 ltr/100km) on the New European DrivingCycle.

In the intelligent interaction of the 3.0-litre supercharged V6 and the electric motor, the Cayenne S Hybrid focuses on maximum efficiency from the overall powertrain system. Depending on driving conditions, the vehicle reaches this target with either only one drive unit operating independently or with both drive units working together. In this context the 34 kW (47 hp) electric motor is of course the ideal partner for the 333 hp compressor engine with its high torque at low speeds. Together, the two drive units deliver maximum output of 380 hp and peak torque of 580 Nm at just 1,000 rpm, with the same kind of performance as the Cayenne S with its conventional V8 petrol power unit.

The two drive units are connected to one another by a separator clutch masterminded by the Hybrid Manager computer. This separator clutch is essential to run the Cayenne S Hybrid either on its electric motor or combustion engine alone, or with both drive units operating together. Thus, under relaxed driving conditions, for example in a residential area, this allows the driver to cover short distances on electric power alone and therefore absolutely free of emissions (and with hardly any noise). Furthermore, it is possible to drive in this mode at speeds of approaching 40 mph (60 km/h).

However, to ensure fast acceleration when setting off, the electric motor may serve to provide additional thrust through its ‘boosting’ effect. Intelligent management of the separator clutch makes for an inconspicuous transition among the hybrid-specific driving modes, and one which is comfortable and quick for the driver. At the same time, the combustion engine may be completely switched off at speeds of up to 97 mph (156 km/h), being fully disengaged from the drivetrain when no further power is required. In this so-called ‘sailing mode’, cruising along without power, the drag forces exerted by the combustion engine and their braking effect are eliminated in the interest of lowering resistance and thus further benefitting fuel consumption.

The maxim of more power on less fuel is demonstrated by the Cayenne S, which now features a 400 hp high-torque 4.8-litre V8 petrol engine. With 15 hp more than the prior model combined with greater economy, this new engine offers significantly better performance overall, just like all models in the new generation of the Cayenne. In particular, fuel consumption is down by 23 per cent, with a Combined mpg of 26.9 (10.5 litres/100km).

Greater efficiency is also an attribute of the Cayenne Turbo, with its 500 bhp (368 kW) twin-turbocharged 4.8-litre V8 returning 27.6 mpg Combined (11.5 ltr/100 km) in the New European Driving Cycle. This is once again 23 per cent less than its predecessor.

The new generation Cayenne goes on sale in the UK on 29th May 2010 priced as follows: