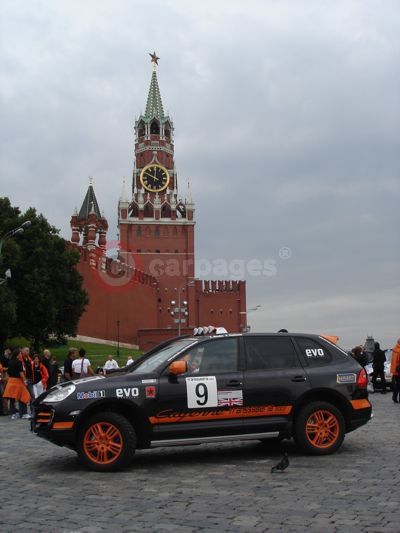 Porsche Cayenne on the Transsyberia Rally

Early on Friday the 3rd August 2007, a Porsche Cayenne S entered by Porsche Cars Great Britain started the first stage on one of the longest motorsport events in the world – the Transsyberia Rallye.

Crossing the starting line in Red Square, in the Russian capital of Moscow, the British team of journalist, Richard Meaden, and Porsche instructor, Neil Hopkinson, began what will be a monumental journey through the largest country on earth to the finish 14 days and 4,412 miles later in the Mongolian capital, Ulaanbaatar, on 17 August.

Over the course of the rallye, teams will drive between these two cities and have to navigate the Ural and Altai Mountain ranges and the infamous Gobi desert. Special stages during the rallye will encompass both tarmac and gravel surfaces, as well as sand and off-road driving, while the weather will also take its toll with every likelihood of flooded river crossings, high-altitude snow blizzards and scorching sand storms being encountered.

The sheer variety of terrain and climate that drivers will experience during the rallye presents a formidable challenge and, in response to this, Porsche has developed a specially modified version of the Cayenne S.

The driver-oriented chassis of the Porsche Cayenne has been designed to combine sports car handling on the road with the added versatility of extreme agility off-road. The recently-introduced second generation Cayenne moves this benchmark to an even higher standard. New power units with direct petrol injection, for example, provide more power and performance on less fuel, cutting fuel consumption by up to 15 per cent versus the for­mer models. Another highlight is the new Porsche Dynamic Chassis Control (PDCC) featuring two active anti-­roll bars to almost completely eliminate body sway when cornering. The PDCC also delivers maximum axle articulation when driving off-road, serving to further improve the already superior traction offered by the electronically-controlled Porsche Traction Management (PTM) all-wheel drive transmission.

In total, 35 teams from 17 nations will be competing against Richard and Neil for the coveted prize of being the fastest to reach the chequered flag in Mongolia.

Richard Meaden (Titchmarsh, Northamptonshire, UK) is a highly-regarded British motoring writer and one of the founding members of the team that created EVO magazine. He has a broad experience of all forms of motorsport and, in 2007 alone, he has already competed in the Nurburgring 24 Hour race and the world-famous Pikes Peak International Hill Climb in the USA.

Richard commented; “It is an amazing route and it will be a truly memorable experience to compete in a long distance rallye like the Transsyberia. The length of the daily stages is quite staggering with over 600 miles being covered on some days.”

Neil Hopkinson (Lutterworth, Leicestershire, UK) is a Porsche instructor, off-road driving expert and expedition organiser. “The Cayenne S is already a very accomplished car on- and off-road, but with the further modifications Porsche has added for the Transsyberia edition, it is well-prepared for the extreme conditions we’ll have to contend with when driving through the Russian and Mongolian wilderness,” said Neil.

Richard and Neil’s progress can be followed on the www.transsyberia-rallye.com website with daily pictures and video webcasts.