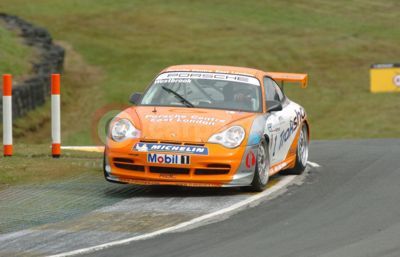 Richard Westbrook scored an emphatic double victory in rounds 15 and 16 of the Porsche Carrera Cup GB at Knockhill, in Fife, Scotland, over the weekend of 27/28 August. However, Damien Faulkner retains a significant championship lead with four races to run. Local ace Gordon Shedden demonstrated his knowledge of the twisting track to good effect, finishing third in race one and second in race two.

Westbrook (Ipswich) swept ahead at the start of the opening race on Saturday and quickly established a lead over Faulkner, which he maintained to the finish to score his ninth win of the season. Behind Faulkner (County Donegal, Eire), Shedden (Dunfermline) battled ahead of Tim Harvey (Woodstock, Oxfordshire) to take third after some fine dicing in the opening stages of the race."I really needed that; it’s good to be back on the top step of the podium," said Westbrook after a faultless performance in his Red Line Racing-prepared car. Having built his lead early on, he controlled the margin to Faulkner and held his rival at a gap of around 1.5s all the way to the flag. "I just made sure I didn’t make any mistakes," he added.Faulkner, in his Team SAS-sponsored car, gave chase, but was never in a position to challenge. "He did what he had to do and I guess I did as well," he said, who maintained a healthy championship lead as a result. "But we’ll be giving it our all in the second race and we’re certainly trying to win races."The battle of the race raged for third place in the opening laps as Harvey and Shedden traded the place several times. Harvey got ahead off the line, but Shedden grabbed the place back on the exit of the Hairpin. Harvey dived through into McIntyres moments later, but Shedden jumped ahead on the approach to the next corner, Clark Curve. Once ahead, Shedden was able to edge a few yards clear over the next laps and as Harvey hit brake problems the gap grew further. However, at the height of their early battle, Stephen Shanly (Clapham) and Nigel Rice (Beverley) from Red Line Racing and Jason Templeman (Nottingham), in the second Team SAS-backed car, all ran in very close formation in a five-car train. "That was really good," said Rice after the race.

After losing out at the start, Templeman battled ahead of both Rice and Shanly, only to hit clutch problems late in the race and slow dramatically. Having tigered ahead of Shanly into Duffus Dip, Rice was able to move ahead of Templeman on the closing lap to take fifth. Behind Shanly, David Ashburn (London) and Steve Clark (Stourbridge) had a lengthy tussle for eighth, which finally went to Ashburn by less than a second. Jim Geddie (Aberdeen) and Michael Corridan (Sudbury) rounded out the finishers.