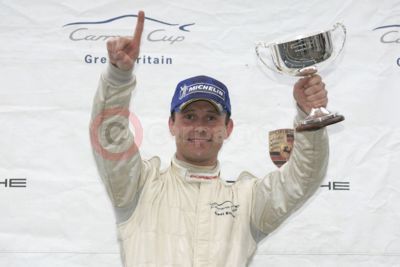 Co Donegal's Damien Faulkner provisionally clinched the 2005 Porsche Carrera Cup GB title at Silverstone on Sunday (18 September). With victory in an action-packed round 17 and second to Richard Westbrook (Ipswich) in round 18, Faulkner now has an unassailable lead in the championship with two races remaining.

Race One In the opening race, Faulkner battled ahead of Westbrook for victory as a wet but drying track delivered a thrilling race of constantly changing fortunes and fierce battles all the way down through the field. For the first half of the race, Westbrook (Red Line Racing) and Tim Harvey (Woodstock, Oxfordshire) battled for the lead as the track surface started to dry out. However, with all the cars running on treaded wet weather tyres, the complexion changed dramatically as the race developed.

First to suffer was Harvey’s Datapulse/Porsche Centre Solihull-backed car, as his tyres started to lose grip and as he dropped away from Westbrook he started to come under pressure from Faulkner’s Team Parker Racing-prepared car. By mid-distance Faulkner had caught Harvey and, with his car sliding around increasingly, Harvey (Team RPM) was unable to fend Faulkner off when he dived through into Copse corner on lap 13. While Jason Templeman (Nottingham) also started to close in on Harvey, Faulkner started hunting down race leader Westbrook.

“I got a slow puncture and so they were reeling me in,” said Westbrook, who was the 2004 Carrera Cup Champion and is supported by Porsche Centre East London. By lap 17, Faulkner was right on Westbrook’s tail, with Templeman closing fast. Faulkner grabbed the lead into Copse, but Westbrook dived back ahead at Becketts as Faulkner saw him coming and made room. That allowed Templeman to make it a three-way lead battle and he even briefly grabbed second from Faulkner at Luffield on lap 18.

Still Westbrook held on in the face of constant challenges from Faulkner’s SAS International-sponsored car, whose car was clearly now faster as the track dried still further. Then, through Brooklands for the penultimate time, Templeman. in the sister SAS International-backed Porsche, clipped the back of Faulkner’s car and damaged his radiator. Finally, into Copse for the last time, Faulkner went decisively ahead and immediately pulled a few yards clear of Westbrook to take a remarkable victory. “It was quite a tricky race and the championship was at stake,” said Faulkner of his carefully measured performance.

With his car leaking coolant from the damaged radiator, Templeman had a quick spin on the final lap as he finished third behind Westbrook. “It was a really good race,” said Westbrook on the podium. “It was the best race this season,” confirmed Templeman after a fighting drive.

Harvey was a secure fourth, but fifth place provided more fabulous racing as four cars battled furiously for position. Scott Mansell (Tamworth) made the early running in the car entered by Porsche Cars in association with Team Autosport. However, as his tyres suffered, the battling Red Line Racing team cars of Nigel Rice (Beverley, East Yorks) and Stephen Shanly (Clapham) reeled him in. Then, in the later stages, Team RPM’s Steve Clark (Stourbridge) worked into contention to make it a four-way battle, with the cars running three abreast on several occasions.

Ultimately, it was Shanly who worked to the front of the pack to take fifth from Clark, Rice and Mansell. “That was really, really good. It was very fair,” said Shanly. “That was a great race; my car was really good at the end when the others were struggling,” added Clark.