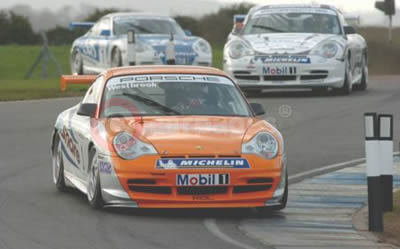 Richard Westbrook swept to a double victory in the opening rounds of the Porsche Carrera Cup GB at Donington Park, Leicestershire, on Sunday (10 April). By twice fending off fierce challenges from Tim Harvey, Westbrook got his championship season off to a perfect start.

"If I’d made one mistake he’d have got me," admitted Westbrook (Hackney, London) as Harvey (Witney, Oxfordshire) chased him home in the opening race on Sunday morning. Damien Faulkner (Co Donegal, Ireland) completed the podium finishers after battling ahead of team-mate Jason Templeman (Nottingham).

From the opening lap, it was Westbrook leading Harvey, Templeman and Faulkner, although a fast-starting Nigel Rice (Beverley, East Yorkshire) edged briefly ahead of Faulkner. Initially, Westbrook pulled a few yards clear as Templeman challenged Harvey. Then, by breaking the lap record three times, Harvey worked back onto Westbrook’s tail.

"It was the same old story - looking in my mirrors after the first corner!" said Westbrook, driving for Red Line Racing, from Stockton on Tees, Cleveland. However, into the second half of the race he was just able to edge away from Harvey to win by 1.3s. "That’s a good start to the Carrera Cup season," said Westbrook, who had won the international Porsche Supercup race in Bahrain seven days earlier. "It was a case of deja-vu, really," said Harvey - of Worcester-based Team RPM - after the race. "However, we’ll make a little change to the car for the second race."

Faulkner spent several laps working to find a way ahead of his Team SAS team-mate, Templeman, but dived through to claim third place under braking for the Chicane on lap 10. However, by then, Westbrook and Harvey were out of reach.

Templeman slipped away in fourth, struggling for rear grip in the second half of the race, and was being caught at the finish by 25 year-old Dan Eagling (Norwich), who was driving the car entered by Porsche Cars GB in association with Team Autosport. "I was a little cautious in the early laps, but from mid-race on I was really happy with my performance," said Eagling, who raced well to move ahead of Rice at the flag.

Dan earned this fantastic opportunity after being selected by readers of leading weekly motorsport magazine, Autosport, to take the wheel of the 185mph 911 GT3 Cup race car. At each race weekend, the car will be driven by a talented young driver whom readers have considered deserving of this valuable career boost.

Having lost the aerodynamic splitter from the front of his car on the opening lap, Rice was destined to struggle for front-end grip and was briefly edged back to seventh by Jason Young (Oakham, Leicestershire). But Rice then re-passed his team-mate to claim sixth place, with Emmanuel Crouvisier (Milton Keynes) completing the top eight.