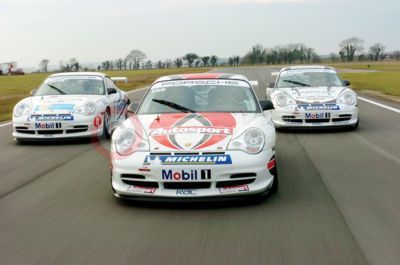 Brands Hatch in Kent is the destination for rounds five and six of the 2005 Porsche Carrera Cup GB as the championship resumes after a four-week break for a pair of races on the spectacular Indy circuit over the weekend of 4/5 June.

For 22-year old Susie Stoddart, from near Oban in west Scotland, the weekend represents a fantastic opportunity as she has been selected to race the car entered by Porsche Cars GB in association with Team Autosport at Brands Hatch during a weekend out from her campaign in British Formula 3.

"I'm really, really excited. It's a big opportunity," says Susie of the chance to race in the Carrera Cup. "I've never raced anything other than a single-seater, so it's a whole new experience. But Brands is a great track and I'll just give it my best shot. I love racing, so this way I get another opportunity to race! It's everyone's dream to be racing a Porsche."

Stoddart raced very successfully in karts from 1996 and then graduated into single-seaters in 1999. In 2003 she was selected as a finalist for the BRDC/McLaren/Autosport Young Driver of the Year Award and was fifth in the 2004 Formula Renault Championship with three podium finishes. In 2005 she has stepped up to British F3, although her season has been interrupted by an ankle injury sustained over the winter.

Heading the field to Brands is Richard Westbrook (Red Line Racing). Having won all four of the opening races at Donington Park and Thruxton against fierce challenges, Westbrook (Hackney) has seized the early points lead in the title race. With a road-going Porsche 911 Carrera up for grabs at the end of the season, there is a lot to play for!

The big threat to Westbrook, who is supported by Porsche Centre East London and www.taxiadvertising.com , comes from Tim Harvey, who races for Worcester-based Team RPM. Although he has slipped a few points back from Westbrook in the early races, Harvey (Witney, Oxfordshire) will be aiming to come out stronger than ever at Brands. During their battle for the 2004 title, both Westbrook and Harvey had disastrous weekends at Brands during two visits to the Kent track, so both will be eager to score well this time around. Harvey is supported by Porsche Centre Solihull and Datapulse.

Taking the fight to Westbrook and Harvey will be the SAS International-backed Team Parker Racing duo Damien Faulkner (Co Donegal, Eire) and Jason Templeman (Nottingham). Templeman dominated at Brands last summer, so he knows he has the pace to win again, while Irish charger Faulkner was the biggest threat to Westbrook at Thruxton last time out. Team Parker Racing is based in Leicester.

Leading the chase of the 'big four' will be Nigel Rice (Beverley, East Yorkshire) and his Red Line Racing team mate Jason Young (Oakham, Leicestershire), who claimed a memorable podium finish at Thruxton. Completing the Red Line Racing squad - based in Stockton on Tees, Cleveland - is Stephen Shanly (Clapham), a former race winner at Brands in National Supersports.

Returning to the Carrera Cup for the Brands weekend will be the Motorbase Performance team, which is based just down the road from the circuit at Wrotham. Leading the driver line-up will be Andy Britnell (Tonbridge) who will be using all his local experience in a bid for a podium finish.

After qualifying on Saturday morning, the first Carrera Cup race will be on Saturday afternoon with the second race on Sunday during the British Touring Car Championship race meeting.