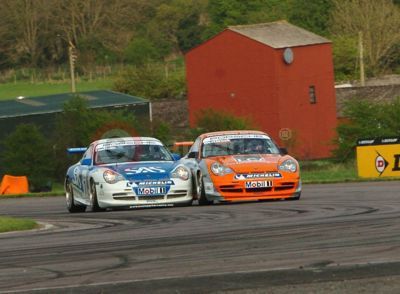 Irish racing driver Damien Faulkner could take over the lead of the Porsche Carrera Cup GB during rounds seven and eight at Oulton Park in Cheshire over the weekend of 18/19 June.

Richard Westbrook (Red Line Racing) has taken a strong grip on the title race and now has a 22-point lead over Faulkner (Team Parker Racing). However, Westbrook, from Hackney, has confirmed that he won't be racing at Oulton Park; instead he will be competing in the Porsche Supercup races supporting the US Grand Prix at Indianapolis.

In 2005, Westbrook is contesting both series but this first date clash has forced him to forego the Carrera Cup GB races. He knows that Faulkner (County Donegal), in particular, can take over the lead in the title race, but that certainly doesn't mean Westbrook has given up on the Carrera Cup. He'll be back at Croft, North Yorkshire, in July, aiming to resume his winning form and he could still retain the title based on his performance over the early season races.

Westbrook has proved unstoppable to date, scoring six wins from six races, but now the door is open for other drivers to taste success and that will put the focus on Faulkner, Tim Harvey (Team RPM) and Jason Templeman (Team Parker Racing).

Harvey (Witney, Oxfordshire) had a nightmare of a weekend last time out at Brands Hatch, when contact with Templeman (Nottingham) led to a major accident in the first race. After the engineers from Team RPM worked through the night, Harvey was forced out of the second race when a cooling water pipe became detached. The former British Touring Car champion will be more determined than ever to get back onto the top of the podium at Oulton Park.

But there’s a gaggle of drivers lining up to rival the top three. These include Red Line Racing trio Nigel Rice (Beverley, East Yorkshire), Jason Young (Oakham, Leicestershire) and Stephen Shanly (Clapham, London). Shanly has yet to race a Porsche at Oulton Park, but has won at the venue before in sports-racing cars. Adding more quality to the field is Kent-based driver Andy Britnell (Motorbase Performance), Stourbridge’s Steve Clark (Team RPM) and Londoner David Ashburn (Track Speed). Meanwhile, reigning British hillclimb champion Adam Fleetwood, from Staffordshire, will make his racing debut in the car entered by Porsche Cars in association with Team Autosport.