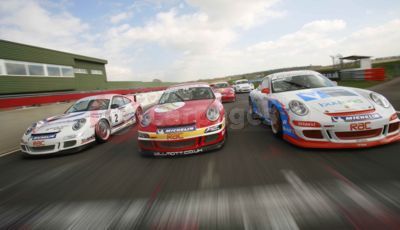 The stage is set for a weekend of high speed motor sport action when the Porsche Carrera Cup GB bursts into life at Brands Hatch (Kent) over the weekend of 31 March/1 April. With Kent-born Tim Harvey topping the entry and Wrotham-based team Motorbase Performance among the leading contenders, there will be plenty for local fans to cheer.

The opening two races of the 20-race schedule will provide the first real guide to form among the class of 2007 as the Carrera Cup runs as a prime support race to the MSA British Touring Car Championship on the Indy circuit at the iconic Kent venue.

With former champions Richard Westbrook and Damien Faulkner contesting the international Porsche Supercup this year, the way is open for a new name as Carrera Cup GB champion and Tim Harvey (Oxford) is being widely-tipped as pre-season favourite. Having finished runner-up twice in the last three seasons, Harvey is justifiably determined to win the 2007 title and a drive with Cleveland’s Red Line Racing has put him into a very strong position. His pace during the recent pre-season test day at Snetterton underlined his current form as he set the fastest ever Carrera Cup lap of the Norfolk track.

But Harvey has opposition from within the Red Line team as well as from other leading squads. Young James Sutton (Barnet) has moved across from single-seaters and his pace at Snetterton showed that he is going to be challenging for race wins from the start of the season.

So too will defending champion team, Team Parker Racing, from Leicester. Michael Caine (Newmarket), a podium finisher last year, will be a major contender, while new signing Rob Collard (Fleet, Hampshire) will surely get to terms with the Porsche very quickly after his switch from touring cars. Rob will start the season having had less time in the car than some of his rivals, but is likely to learn very quickly.

The line-up at Motorbase Performance has come together well in recent weeks and the team is another with very serious title ambitions. Sam Hancock (Clapham) has run very strongly in testing and is clearly a contender, while former single seater Formula 3 racer Steven Kane (London) is a late addition to the team and could be a real dark horse. Like Collard, his time in the car before the Brands weekend will be very limited, but Kane is expected to fly as he adapts to sports car racing.

And there is more than on-track supremacy at stake. The overall 2007 Porsche Carrera Cup GB Champion will also be presented with a new Porsche 911 Carrera, on loan for twelve months following their victory.

While the leading contenders contest the overall title, a gaggle of quick racers will be battling over the Pro-Am category, which offers non-professional racing drivers and those with less experience the chance to compete for a separate points and awards package, whilst still competing within the overall Carrera Cup. Two drivers stand out as the pre-season favourites, with Nigel Rice (Beverley) and Andy Britnell (Hildenborough) expected to be front-runners. Rice set a scorching pace at Snetterton earlier in March to top the Pro-Am times.

Others running in Pro-Am include David Ashburn (London), Maxi Jazz (S Norwood) and series newcomer Charles Bateman (Boston), who is one of the crop of new young drivers in the Carrera Cup this season. Pete Osborne (Worksop) returns to build on a solid debut season in 2006, and is joined by championship newcomers Mark Stephenson (Chester) and Colin Willmott (Redditch).

Racing in the car entered by Porsche Cars GB is Jon Barnes (Southampton), one of the finalists from the 2006 McLaren/BRDC/Autosport Young Driver of the Year award. Barnes has raced in the Carrera Cup before and will be aiming to use that experience to good effect at Brands.

With several more drivers due to confirm plans in the run up to the opening races, the stage is set for a great season of Carrera Cup racing. Harvey starts favourite, but there is no shortage of talented drivers aiming to mount their own title bid.