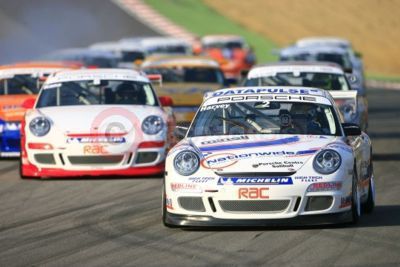 The stunning Rockingham track is the venue for rounds three and four of the Porsche Carrera Cup GB over the weekend of 21/22 April 2007.

As the Carrera Cup returns to the Corby (Northamptonshire) track for the first time in four seasons, the stage is set for two fine races. None of the drivers has raced on the layout of the spectacular venue to be used this weekend, so the form of the opening rounds could be shaken up.

However, early championship leader Tim Harvey (Oxford) is sure to be at the head of action following a dominant weekend at Brands Hatch. "I raced on the original layout back in 2001," said Tim. "But I haven't raced there since and it'll be good to go to a new circuit. We've not tested there yet, so we'll only have the Friday sessions to find a set-up. I don’t think the banked corner will be comfortably flat, but we'll have to see."

The high-speed corner in front of the grandstands is one of the features of Rockingham, and is expected to encourage lots of overtaking on the run out of the corner and on to the Deene Hairpin.

Set to take the fight to Harvey is Michael Caine (Newmarket), and he's relishing the new challenge offered by Rockingham. "No one has really been there and it offers a different challenge. It should be fantastic for spectators as they can see the whole circuit from the grandstands."

Joint second in the points with Caine is James Sutton (Barnet) and he is one of a clutch of rising stars making their name in the Carrera Cup this season. Others include Steven Kane and Sam Hancock from Motorbase Performance. Hancock (Clapham) will have been buoyed by a very strong showing in recent testing at Thruxton, while Kane is the local racer for Rockingham as he lives in Brixworth, near Northampton.

Joining former touring car ace Harvey on the grid will be two more drivers with extensive BTCC experience. Rob Collard (Fleet) has joined Team Parker Racing this season and is rapidly building his Porsche experience, while James Pickford (Macclesfield) will be a podium contender following a troubled debut at Brands Hatch.

While the leading contenders contest the overall title, a gaggle of quick racers will be battling over the pro-am category, which features a separate points and prize money package. Two drivers stand out as the major contenders, with Nigel Rice (Beverley, E Yorks) and Andy Britnell (Hildenborough, Kent) likely to re-new the battle they enjoyed in the second race at Brands. Rice won the opening race convincingly, but Britnell turned the tables in the second round.

Others running in pro-am include Maxi Jazz (Norwood) and series newcomer Charles Bateman (Boston), who is another of the crop of new young drivers in Carrera Cup this season. Pete Osborne (Worksop) returns to build on a solid debut season in 2006, and is joined by championship newcomer Colin Willmott (Redditch).

Racing in the car entered by Porsche Motorsport is Andrew Kirkaldy from Milton Keynes, a former winner of the McLaren/BRDC/Autosport Young Driver of the Year award. Since his single-seater days, Andrew has excelled in GT racing, so he should fly in the Porsche at Rockingham.