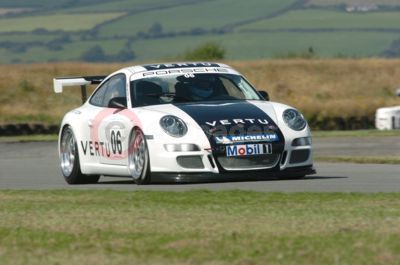 Competitors in the 2006 Porsche Carrera Cup GB Championship, which begins at Brands Hatch circuit in Kent on April 8/9, will not only enjoy the thrill of racing the new Type 997 911 GT3 Cup for the first time but will also be racing for longer and for bigger cash prizes.

The debut of the all-new 911 GT3 Cup re-affirms the long-term commitment to British motorsport by Porsche Cars GB, as the car will be used in the 2006 Carrera Cup and continue at least into 2007 and 2008 in a new three-year programme. The previous model (Type 996) had been used in the Carrera Cup GB since the championship was introduced in 2003.

Now entering its fourth season, the 2006 Carrera Cup comprises a superb 20-race programme alongside the MSA British Touring Car Championship (BTCC). Using the Carrera Cup format that is established in many countries around the world, the Championship sees drivers racing identical versions of the new 400bhp Porsche 911 GT3 Cup car. And, with minimal modifications permitted to the cars, it is only the drivers’ skill, talent and experience that makes the decisive difference in the fight for victory, points and prize money.

Spectacular action is always a feature of the Porsche Carrera Cup GB and with high calibre drivers taking part, close racing between the cars is guaranteed. However, with the prospect of a bumper field for 2006 as the all-new 911 GT3 Cup is introduced, the Championship has been given a major increase in track time at each of the ten BTCC race weekends. This will see drivers benefit from significantly longer race distances, with two half-hour races (time permitting) at every meeting and a special 45-minute endurance event at Mondello Park in April.

The prize fund of the Porsche Carrera Cup GB has also evolved and a purse in excess of £150,000 will be shared across the grid in 2006. In addition, the overall 2006 Porsche Carrera Cup Champion will also be presented with a new Porsche 911 Carrera, on loan for twelve months following their victory.

The championship will also be run in a new, two-tier driver structure, allowing competitors to compete in either a professional or professional-amateur category, depending upon their profile and past performance. The new structure offers non-professional racing drivers and those with less experience the chance to compete for a points and awards package, whilst still competing within the overall Carrera Cup.

Porsche Cars GB races into the 2006 season with a new partnership with Vertu, the world’s first and only manufacturer of handcrafted luxury mobile phones. The agreement will create a Vertu-branded guest car that will compete in the Porsche Carrera Cup Great Britain Championship to be driven by a selection of high-profile motoring personalities.

Catch up with the action around Great Britain and Ireland

Up to 200,000 race fans are expected to see the action first hand in 2006, while an extensive TV package - subject to confirmation - will take the Porsche Carrera Cup GB to millions of ‘armchair’ enthusiasts.