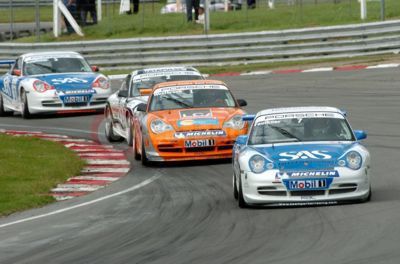 The Porsche Carrera Cup GB heads to East Anglia for rounds 13 and 14 at the Snetterton circuit near Norfolk over the weekend of 6/7 August.

Currently vying for his second consecutive title is Ipswich racer Richard Westbrook, who is having an incredible season of racing as he contests both the Carrera Cup GB and the international Porsche Supercup. He will arrive at Snetterton straight from racing in the Supercup race supporting the Hungarian Grand Prix the previous weekend.

The teams and drivers in the race series for identical 390bhp Porsche 911 GT3 Cup cars will head to Snetterton at the culmination of a very busy period of racing. The pair of Snetterton races will complete a run of seven races in four weekends after previous events at Croft (Yorkshire) and Mondello Park (Ireland). With a road-going Carrera 911 awaiting the champion as the major end of season award, there is a great deal at stake.

Westbrook knows he can count on a great deal of local support. "Snetterton is the home race for me and there will be loads and loads of support from the crowd," says Westbrook. "I grew up in Ipswich and my family is still based in Suffolk.

"I absolutely love the circuit. Some people don’t find it that big a challenge, but it really is. It’s difficult to hook up a good lap at Snetterton and it takes a lot of commitment through the Bomb Hole and Coram and when you get it right you get a lovely feeling. It’s very rewarding."

The Westbrook relationship with Snetterton goes back a long way. Richard’s father Tony was a Mini racer in the early 1970s and it was at the circuit that the young Richard made his first steps in competition.

"My first ever kart race was at Snetterton when I was nine years old. There used to be a kart circuit opposite the market and that was the only place I raced for the first three years. So it really does feel like home for me. It’s where it all started for me."

However, Westbrook has plenty of rivals for the Snetterton races, notably Irish ace Damien Faulkner (Co Donegal, Eire) who has recently moved ahead of Richard in the battle for the championship title. Former touring car champion Tim Harvey (Witney, Oxfordshire) is another front-runner and he is looking for some good results to put a fairly troubled year behind him. Jason Templeman (Nottingham) is the other member of the leading quartet that has consistently set the pace this season.

More local interest comes from Jeremy Clark (Wymondham, Norfolk), who will make his Porsche debut in the car entered by Porsche Cars in association with Team Autosport. Jeremy has earned the chance to race this car following his performances in club level racing, and will now step into the big time for the weekend at his home track.

Adding depth of quality to the field are Stephen Shanly (Clapham), Nigel Rice (Beverley, East Yorkshire), Jason Young (Leicestershire) and Steve Clark (Stourbridge, West Midlands). They will all be racing hard to rival the top four, but all local eyes will be on Richard Westbrook.

Porsche 911 GT3 Cup Images may not be UK specification cars. Colours and exterior and/or interior elements may differ from actual models.