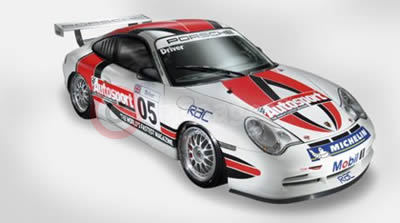 Competitors in the 2005 Porsche Carrera Cup GB Championship, which begins at Donington Park circuit in Leicestershire on April 9/10, will once again be racing to win the keys to a brand new Porsche 911 Carrera, worth over £60,000. New for this season is an innovative programme designed to give young drivers the chance to prove themselves behind the wheel of a 185mph 911 GT3 Cup race car.

Spectacular action is always a feature of the Porsche Carrera Cup GB and, with such a prestigious prize at stake, close racing between the drivers is guaranteed. The battle for the 2004 Championship title demonstrated just how close the action can get. Richard Westbrook (Hackney, London), of Red Line Racing from Cleveland, and Tim Harvey (Witney, Oxfordshire), of Team RPM, based in Worcester, took their title fight down to the last race of the season at Donington Park. The Championship was ultimately decided in Westbrook’s favour with just three laps remaining, following a nail-biting finale.

Richard returns to the Porsche Carrera Cup GB this year to defend his crown, but with Tim also coming back for a second tilt at the title, the scene is set for another superb season.

With the 2005 Championship offering a cash fund of £100,000, in addition to the headline award of a brand new Porsche 911 for the overall Champion, the Carrera Cup can rightly claim the title of Britain’s most exciting - as well as potentially lucrative! - race series.

Furthermore, for each of the races this year there will be cash prizes totalling over £3,000, with prize money being awarded down to tenth place, supplemented by a new award for ‘Driver of the Day’ for the best performance by one driver in both the weekend’s races.

Now entering its third season, the 2005 Carrera Cup comprises a superb 20-race programme alongside the MSA British Touring Car Championship (BTCC). Using the Carrera Cup format that is established in many countries around the world, the Championship sees drivers racing identical versions of the 390bhp Porsche 911 GT3 Cup. And, with minimal modifications permitted to the cars, it is only the drivers’ skill, talent and experience that makes the decisive difference in the fight for victory, points and prize money.

A new feature for the 2005 season is an exciting initiative intended to give specially selected young drivers the chance to showcase their talents in a Porsche 911 GT3 Cup race car. For this purpose, Porsche Cars GB will once again run one car in each of the races and, in association with Autosport, the UK’s best-selling weekly motorsport magazine, the drivers have been nominated via a reader selection process.

Drivers confirmed for the coming year include Dan Eagling from Norwich, Norfolk, who will be the first to take the wheel of the Autosport-liveried car at Donington Park on April 9/10, Susie Stoddart (Oban, Scotland), Adam Fleetwood (Great Bolas, Shropshire), Paul Rivett (Banstead, Surrey) and Gordon Shedden (Fife, Scotland).

Catch up with the action around Great Britain and Ireland

Up to 200,000 race fans are expected to see the action first hand in 2005, while an extensive TV package will take the Porsche Carrera Cup GB to millions of ‘armchair’ enthusiasts. Following the success of its coverage in 2004, the Motors TV channel will - subject to confirmation - again be broadcasting spectacular live coverage of every race.