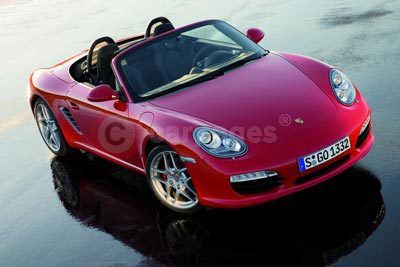 In 1948, the 356 was the first sports car to bear the Porsche name, and in July that year the lightweight mid-engined roadster achieved its first motorsport victory. In 1953, the Porsche 550 Spyder was launched. This agile, lightweight race car was powered by a high performance 'boxer' engine which took it to countless international victories.

Through 60 years of automotive evolution so much has changed. Yet every Porsche Boxster is built on these first principles. Sports performance, lightweight construction, agility and pure driving pleasure. The technology Porsche use may have developed, but the company's ability to produce a two-seat, mid-engined sports car unlike any other on the road remains.

Porsche is now presenting the second generation of the mid-engined Porsche Boxster roadster at the Los Angeles Motor Show (November 21st to 30th November 2008). The highlight of the new generation is the new flat-six 'boxer' engines, developed with new technical features from the ground up, providing not only more power, but also significantly greater fuel efficiency.

A further improvement of both fuel economy and performance is guaranteed by the Porsche Doppelkupplungsgetriebe (PDK), the new double-clutch gearbox now available as an option on both the Porsche Boxster and Posrche Boxster S.

Displacing 2.9-litres, the engine of the Posrche Boxster develops 255 bhp (188 kW), an increase of 10 horsepower over the prior 2.7-litre model.

When combined with PDK, the new 2.9-litre engine fitted to the Posrche Boxster clearly breaks through the 30.0mpg fuel consumption boundary. Indeed, the figure of 31.0mpg (9.1 litres/100km) is approximately 10 per cent better than the previous model with the Tiptronic S automatic transmission. Increasing fuel economy by an even more significant 15 per cent to 30.1mpg (9.4 litres/100km), the 3.4-litre Posrche Boxster S with PDK offers an even greater saving over its predecessor with Tiptronic S.