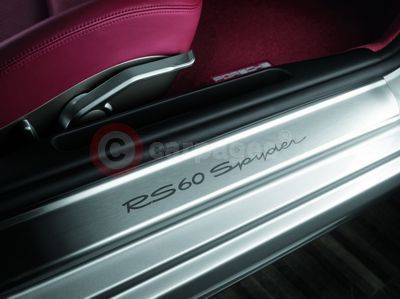 Porsche is presenting a new version of the mid-engined Boxster roadster at the Bologna Motor Show in Italy on December 5 - 16. In its distinctive design, features and philosophy, the Boxster RS 60 Spyder echoes the classic motorsport era of the 1960s, and in particular the success of Porsche sports cars during that period.

After countless class wins around the circuits of Europe and America, in 1960 the Porsche Type 718 RS 60 Spyder beat competitors with much larger engines to score its first overall victory in the 12 Hours of Sebring in Florida, USA, one of the most prestigious long-distance sports car races, courtesy of Hans Herrmann and Olivier Gendebien.

The new Boxster RS 60 Spyder reflects the sporting character and design purism of that successful mid-engined two-seater sports racing car. The RS 60 Spyder is based on the acclaimed Boxster S model, but differs significantly in terms of its performance and features.

Externally, the RS 60 Spyder is distinguished by a unique front spoiler and 19-inch diameter Porsche SportDesign alloy wheels, which spacer plates have moved outwards purposefully in the wheel arches. A modified sports exhaust system combined with dual tailpipes increases engine output to 303 bhp as well as adding further definition to the car’s appearance. Completing the sporting orientation to the driving experience is Porsche Active Suspension Management (PASM) which adds further dynamism to the Boxster chassis.

Inside, door trim strips made of stainless steel proudly bear the “RS 60 Spyder” model designation. The leather interior trim is further distinguished by a textured surface on the centre sections of the sports seats and the centre door linings, and this also extends to the steering wheel rim and handbrake lever. Completing the sporting ambience is a bespoke gear lever.

Complementing the exterior appearance, the faces of the instrument dials have a GT Silver Metallic finish and with this model not having the usual hood over the instrument cluster, the large central rev counter and the two circular dials on either side bring something of the flair of a racing car to the cockpit.

Further features include the windscreen surround finished in black, as well as the centre console, the seat backrests and the roll hoops all finished in GT Silver Metallic and thus harmonising with the seat belts also finished in Silver.

Reflecting its model designation, the Boxster RS 60 Spyder is limited to 1,960 examples, each one proudly bearing a silver-coloured plaque on the lid of the glove compartment.

The Porsche Boxster RS 60 Spyder will be priced from £45,400 including VAT, and deliveries in the UK and Ireland begin from March 2008.