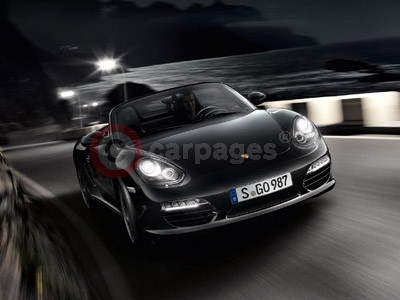 The Porsche Boxster S Black Edition combines the timeless appeal of the classic open-roofed roadster with a powerful engine and dramatic styling. Just 987 will be available worldwide, each one finished in black and with a range of special features that accentuate the driving dynamics and muscular appearance of the two-seater sportscar.

When fitted with the seven-speed Doppelkupplungsgetriebe (PDK) double-clutch gearbox, dynamics and efficiency are raised even further. This shortens acceleration times from 0-62 mph to 5.1 seconds, and in combination with the Sports Chrono Package Plus with launch control this can be lowered further still to 4.9 seconds. In comparison with the manual transmission, the intelligent gear shifting strategy of PDK lowers fuel consumption to 30 mpg Combined (NEDC) and, more significantly, reduces the CO2 emissions to 221 g/km; placing the Porsche Boxster S Black Edition in vehicle excise duty Band K.

The colour concept of the Porsche Boxster S Black Edition is consistent in every detail. The model lettering painted in black on the rear luggage compartment lid identifies the Black Edition as much as the embossed Black Edition model designation on the side of the fabric hood. The roll-over bars are painted in black, together with the rear side air intake grilles and the twin tailpipe of the exhaust system.

The black theme of the exterior is continued inside. The stainless steel door entry guards feature the "Black Edition" model lettering in black. The standard, three-spoke Sport Design steering wheel has a black leather rim. The trim strips of the dashboard and of the gear shift lever or PDK selector are painted in black. The dials on the instrument cluster are black, as are the partial leather seats with the Porsche emblem embossed in the headrests. A bespoke badge on the glove compartment lid further identifies each Porsche Boxster S Black Edition.

The Porsche Boxster S 'Black Edition' goes on sale in the UK and Ireland from March 2011 and is priced from £47,426. Included in the purchase price is the invitation for customers to explore the dynamic attributes of their Boxster and develop their own skills behind the wheel, courtesy of a Driving Experience Programme at the Porsche Experience Centre at Silverstone.