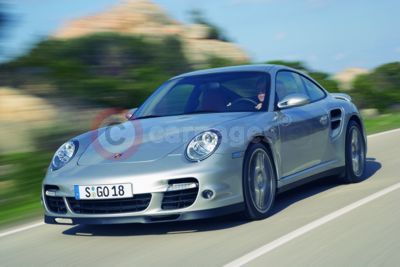 Porsche is extending its current product range with the addition of a new 911 Turbo. The sixth generation of the top-of-the-range 911 model will be celebrating its world premiere on 28 February, 2006 at the Geneva Motor Show, ahead of going on sale in the UK early this summer.

Featured for the first time in a petrol engine, the turbocharging system of the new 911 Turbo uses variable turbine geometry technology to increase engine performance across the rev range. These improvements translate into a stunning driving performance. The new 911 Turbo with six-speed manual transmission requires 3.9 seconds for the standard sprint from 0 - 100km/h (0-62mph). The coupé reaches the 200 km/h mark (124mph) in 12.8 seconds. And just 3.8 seconds are all it takes for the most powerful series-built 911 model of all time to accelerate from 80 to 120 km/h (50–75mph) in fifth gear. Against this background of enhanced performance statistics, Porsche engineers have also succeeded in reducing average fuel consumption to 22.1mpg.

The 911 Turbo with the optionally available Tiptronic S automatic transmission puts in an even more impressive performance. An optimised set-up gives the vehicle the ability to power from 0 - 100km/h (0-62mph) in just 3.7 seconds and to reach 200 km/h (124mph) after just 12.2 seconds.

The Turbo with Tiptronic automatic transmission also has the advantage when it comes to flexibility. In fourth gear it accelerates from 80-120 km/h (50-75mph) in 3.5 seconds. Furthermore, fuel consumption of the Tiptronic S variant is also lower than that of its predecessor: 20.8mpg in accordance with the EU standard. Both transmission variants have a top speed of 310 km/h (193mph).

The flexibility of the 911 Turbo can be enhanced even further with the optional Sport Chrono Package Turbo, available for the first time. By engaging the Sport button adjacent to the gear lever, this feature enables the driver to activate a short-term turbocharger ‘overboost’ function at full throttle. This increases boost pressure in the mid-speed range by 0.2 bar for up to ten seconds; torque rises by 60Nm to 680 Nm. In this configuration, the time required by the 911 Turbo with manual transmission for intermediate acceleration from 80 to 120 km/h (50-75mph) is reduced by 0.3 seconds to 3.5 seconds.

Porsche 911 Turbo Images may not be UK specification cars. Colours and exterior and/or interior elements may differ from actual models.