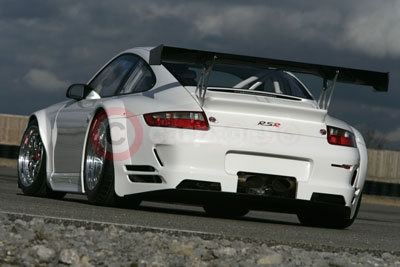 The Porsche 911 GT3 RSR is the most powerful race car based on the Porsche 911 sports coupe, and last year it scored wins in the renowned 24-hour races at Le Mans in France and Spa in Belgium, as well as overall victory in the gruelling Nurburgring 24 hours in Germany.

The 911 GT3 RSR is designed for competition in the GT2 class of international long-distance racing, and for the 2008 motor sport season it has gained extensive modifications. The most distinguishing feature of the new GT3 RSR is the front end, which receives major improvements to the aerodynamics. The majority of innovations, however, are hidden beneath the lightweight body.

Aside from the easily recognisable additional spoilers on the front apron, so-called ‘flicks’, optimised air ducting with newly-designed side air outlets generate more aerodynamic downforce and reduce drag. The rear end, including the rear wing, is carried over from the previous car. Under the skin, extensive changes to the suspension kinematics have increased mechanical grip considerably and the range of suspension set-up options, to better suit different race track characteristics, has been broadened.

The 3.8-litre flat-six cylinder ‘boxer’ engine of the GT3 RSR remains unchanged apart from slight improvements to details. It delivers 465bhp (342 kW) at 8,000rpm and maximum torque of 430Nm at 7,250rpm. The rev limiter kicks in at 9,400rpm. Much of the know-how in the totally new gearbox of the GT3 RSR has come from the RS Spyder sports prototype race car. As a consequence, the sequential six-speed unit - developed by Porsche engineers - is considerably lighter than its predecessor, and internal friction is substantially reduced. Finally, the flat angle of the drive shafts allows teams a variety of alternative suspension configurations.

Alongside the GT3 Cup and the GT3 Cup S, the GT3 RSR is the third race car based on the Porsche 911 offered by Porsche Motorsport, based in Weissach, Germany. Thirty-five units of this fastest and most powerful racing derivative of the 911 are now being produced and delivered to customer teams around the globe. The price of the 911 GT3 RSR is 349,800 Euro plus VAT.