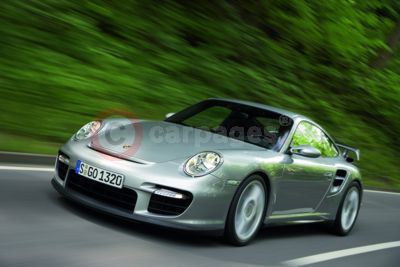 The new Porsche 911 GT2 expresses the power and performance potential of the fastest-ever 911 even at a standstill. Distinguished by its striking design, with large air intakes at the front and the rear wing so characteristic of this very special model, the latest GT2 maintains the reputation of this specialised edition.

Available exclusively with rear-wheel drive and a manual six-speed gearbox, this high-performance athlete accelerates from 0 to 62mph in just 3.7 seconds and reaches a top speed of 204mph. This is combined with an average fuel consumption of 22.6mpg (12.5 litres/100km) in the New European Driving Cycle (NEDC), thus offering a level of fuel economy regarded as quite impossible in this performance class just a few years ago.

The increase in engine power by 50 bhp over the ‘regular’ 911 Turbo model is provided in the new 911 GT2 by fitting the two turbochargers with a larger compressor wheel and a flow-optimised turbine housing, raising turbocharger pressure to an even higher level. And for the first time, the engineers at Porsche have combined the turbocharged engine with an expansion-type intake manifold - a genuine revolution on turbocharged power units. The expansion intake manifold uses the principle of oscillating air in the intake manifold during the cooler expansion phase, keeping the temperature of the fuel/air mixture lower than is the case with the 911 Turbo. This, in turn, means a significant increase in all-round efficiency, with fuel consumption down by up to 15 per cent under full load despite the increase in engine output.

The 911 GT2 offers new achievements also in terms of emissions management and control. This is the first Porsche homologated for the road to feature a rear silencer and tailpipes made of titanium as standard equipment. This expensive material reduces weight by approximately 50 per cent versus a comparable component made of stainless steel to just 9kg.

The new 911 GT2 comes as standard with Porsche Ceramic Composite Brakes (PCCB), featuring brake discs made of a composite carbon fibre/ceramic compound ensuring maximum stopping power maintained with an extremely high level of consistency. A further advantage is that PCCB reduces the weight of the unsprung masses versus comparable grey cast-iron discs by approximately 20kg (44lb).

Yet another feature fitted as standard is the electronically controlled Porsche Active Suspension Management (PASM). The GT2 rides on 19-inch diameter light-alloy wheels, running at the front on 235/35 ZR 19 tyres and at the rear on 325/30 ZR 19 tyres.

The new 911 GT2 will cost from £131,070, including a Porsche Vehicle Tracking System (VTS), a sophisticated vehicle security package approved to Thatcham Category 5 standard, and a Porsche Driving Experience course.

The 911 GT2 will make its debut at the International Auto Show in Frankfurt, Germany, in September and  arrives in Porsche Centres across the UK and Ireland during November 2007.