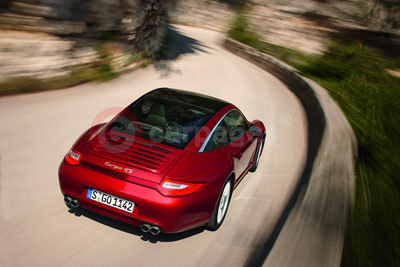 As their designation implies, the Porsche 911 Targa 4 and Targa 4S remain exclusively available with four-wheel drive. For the new generation models, the all-wheel drive is now provided via electronically-controlled Porsche Traction Management (PTM), which replaces the viscous multiple-plate clutch arrangement fitted previously. The superior PTM system was first developed for the Porsche 911 Turbo and has been modified for the Targa models. The transmission delivers an even higher level of driving stability, traction and agility, further enhanced by the mechanical limited slip differential also now fitted as standard to the rear axle.

PTM feeds exactly the right amount of engine torque in each situation through an electronically-controlled multiple-plate clutch to the front wheels, supplementing the flow of power to the rear wheels. Combined with the highly dynamic PTM control system, this clutch precisely delivers a distribution of power and torque to the front and rear axles as road and driving conditions change. With the previous viscous clutch, up to 40 per cent of torque could be directed to the front axle. In contrast, the new electronically-controlled PTM system delivers an infinitely variable torque split, and is able to distribute up to 100 per cent of traction to the front or rear wheels.

PTM provides a faster and more precise transmission of power in all driving situations, and this offers not only excellent stability at high speeds, but also increases further the level of responsiveness of the car to the driver.

The Porsche 911 Targa 4 models share their all-new flat-six engines with Direct Fuel Injection (DFI) with the sister models in the next generation Porsche 911 line-up. With the launch of the new 911 Carrera model series, Porsche is introducing direct fuel injection in the company’s range of sports cars. The advantages are an increase in engine power by up to 8.5 per cent, a reduction in fuel consumption by 11.2 per cent, and a decrease in CO2 emissions by 13.6 per cent, depending on the respective model and its features. Specifically, output of the 3.6-litre power unit is up by 20bhp to 345 bhp (254 kW). The improvements on the 911 Targa 4S with its 3.8-litre power unit are equally significant, with maximum output up by 30bhp to 385 bhp (283 kW).

The driver benefits from a further advantage of direct injection every time he touches the throttle pedal: with fuel being injected fractions of a second prior to combustion, the engines respond more directly and spontaneously to even the slightest movement of the driver’s right foot. This is not only the case when accelerating, but also when lifting off the throttle, for engine speed drops more quickly and smoothly since there is no residual fuel left in the intake manifold which might otherwise prolong the combustion process.