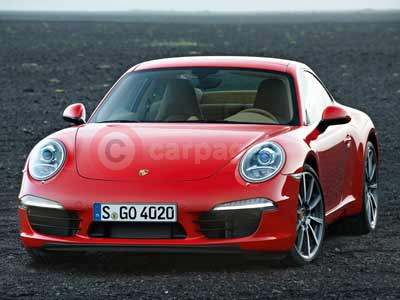 At the 2011 Frankfurt Motor Show, the new Porsche 911 Carrera will have its world premiere, ahead of going on sale in the UK on 17th December 2011.

The new Porsche 911 Carrera features a 100mm longer wheelbase offering improved stability and an increased interior space. The front and rear overhangs are now shorter and the sporting stance is further emphasised with a lower roof line and wider front track. Redesigned exterior mirrors are now mounted on the upper edge of the door, which provides improved aerodynamics and emphasises the new line design and a visual impression of width.

The flat six cylinder rear-mounted engine is uprated, offering increased power and improved efficiency. The new Porsche Carrera features 3.4 litre engine produced 350hp, with PDK offering a 0-62mph time of 4.6 seconds, when fitted with the optional Sport Chrono Pack reduces the time to 4.4 seconds, whilst the Carrera S features a 400hp version of the 3.8 litre engine delivering a 0-62mph time of 4.3 seconds (Sport Plus 4.1 seconds).

For the first time, the Porsche Carrera S features the Porsche Dynamic Chassis Control (PDCC) active roll stabilisation system, which reduces body roll during cornering, allowing the tyres to retain their optimal position relative to the road surface and in turn transmitting higher lateral forces which, for the driver, means the maximum corners speeds are increased.

Fuel consumption and emissions have been improved in the new Porsche Carrera and Carrera S, boasting up to a 16% increase compared to previous models. This has been achieved in part by auto start/stop, thermal management, electrical system recuperation, the world's first seven speed manual transmission and in conjunction with the Porsche-Doppelkupplungsgetriebe (PDK) – a 'coasting' function that decouples the engine for enhanced fuel efficiency when the throttle is closed.

The Porsche 911 Carrera with the new 250hp 3.4 litre direct injection engine and optional PDK returns 34.4mpg on the combined cycle and 194g/km CO2, making it the first Porsche sports car to emit under 200g/km CO2. The 400hp 3.8 litre Porsche 911 Carrera S has a combined fuel consumption figure of 32.5mpg when paired with the optional PSK and 205g/km CO2 emissions/