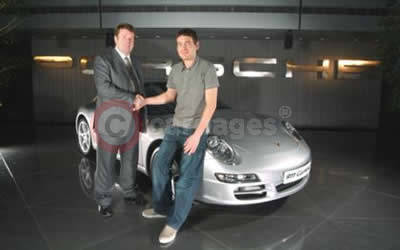 Top British racing driver Richard Westbrook has been presented with a brand new Porsche 911 Carrera, his prize for winning the 2004 Porsche Carrera Cup GB Championship. Richard (30) received the keys to the 177mph sports car from Andy Goss, managing director of Porsche Cars GB, during a hand-over ceremony at the German marque’s UK headquarters in Reading, Berkshire.

After a thrilling season-long contest, the London-based driver pipped his rival Tim Harvey, from Witney, Oxfordshire, to the 2004 Championship crown, and the keys to a new Porsche 911 Carrera coupe.

"Seeing the car now makes me realise what last year was all about," said Richard, during the presentation. "It's taken a long while to sink in. It's the best prize in British motorsport!"

He will shortly announce an extensive racing programme for the coming season, which will build on his successful 2004 campaign.

A total prize fund of more than £150,000 has been put in place for the 2005 Porsche Carrera Cup GB Championship, which begins at Donington Park, Leicestershire, on April 9/10. The headline award for the Champion will once again be a brand new Porsche 911 Carrera, a prize with a value of more than £58,000.

The Teams' Championship, won in 2004 by Red Line Racing, of Stockton-on-Tees, Cleveland, looks set to be just as hotly contested this season, with a prize fund of £16,500 divided amongst the top three teams at the end of the year.

Porsche 911 Carrera Images may not be UK specification cars. Colours and exterior and/or interior elements may differ from actual models.