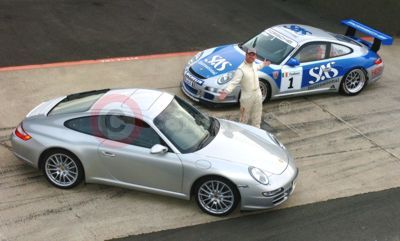 Irish racing driver Damien Faulkner has been presented with the £60,000 road-going Porsche 911 Carrera that is his prize for winning the 2005 Porsche Carrera Cup GB.

Faulkner, from Co Donegal, racing for Team Parker Racing (based in Leicestershire) and backed by SAS International, had a fantastic season in 2005, finishing on the podium in 19 of the 20 races. Eventually, he fought off the challenge of defending champion Richard Westbrook to claim one of the biggest prizes in British motor sport.

Faulkner (29) was elated to be presented with his new car during the recent Carrera Cup pre-season test day at Silverstone. "Winning the championship means everything. It's the satisfaction and fulfillment for me, the team and the sponsors," he said. "Now, seeing this amazing prize just brings it all home to me. I can’t want to drive it!"

For most of his career, Faulkner has put all of his money into his racing and has never been able to afford a road car of his own. To get around his native Ireland, he has borrowed vans from the family garage, but now he has the 911 Carrera to use.