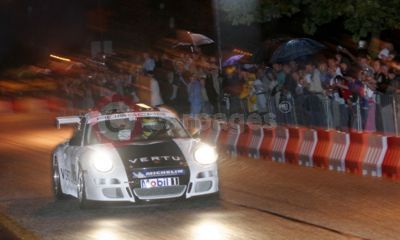 The stunning new ‘Type 997’ Porsche 911 GT3 Cup car, which will be used exclusively in the 2006 Porsche Carrera Cup GB, was one of the star attractions on the roads of Milton Keynes on Thursday, 15 September.

As the British Touring Car Championship and its key support races took to the streets to promote this weekend’s Silverstone race meeting, Tim Harvey thrilled the huge crowd with his handling of the Porsche race car during its first public demonstration.

In front of a crowd estimated at 12,000, the 400bhp 911 GT3 Cup was a big hit with the spectators, both while static in the paddock area and in action on tree-lined Avebury Boulevard. And local driver Harvey, from Woodstock, Oxfordshire, signed hundreds of autographs for the enthusiastic crowd.

"Apart from Richard Westbrook, who has been racing these cars in Europe in the Porsche Supercup, I am the first of the Carrera Cup GB drivers to drive this new car," said Harvey, who currently lies third overall in the 2005 Porsche Carrera Cup GB championship. "It felt very different to our current car, based on the ‘Type 996’ 911 GT3, and much closer to the 911 GT3 RSR that I raced recently.

"The event was a spectacular success and I think it surprised everyone just how many people were there," he added. "I was impressed not just with the number of people, but the level of enthusiasm in the crowds."

Porsche 911 GT3 Cup Images may not be UK specification cars. Colours and exterior and/or interior elements may differ from actual models.