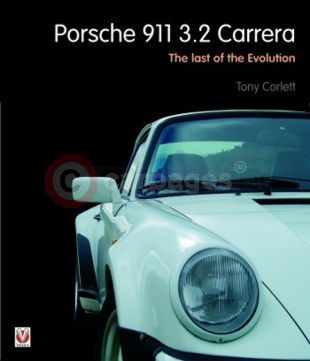 The last of the Evolution Contents

Written by an enthusiast for enthusiasts, Covers the history and development of the Porsche 3.2 Carrera, the very last model officially designated "911". From resurrection in 1984 to final production in 1989, covers design and production, and provides an in-depth look behind the scenes at Porsche’s Zuffenhausen factory in Stuttgart.

From Ferrari in the early days, through Alfa Romeo, Lotus, McLaren & Porsche, Tony has had an intense interest in engineering quality and inspired automotive design. He has been the 911 3.2 Register Secretary for the Porsche Club Great Britain for some years and has been working on this exacting Carrera book for some considerable time. Tony lives on the Isle of Man and, amongst other interests, including writing, photography and designing houses, collects classic and sports cars. Currently he has three Porsche icons in his collection.

Veloce books are stocked by or can be ordered from bookshops by quoting the correct ISBN number. Books can also be ordered on our website - www.veloce.co.uk