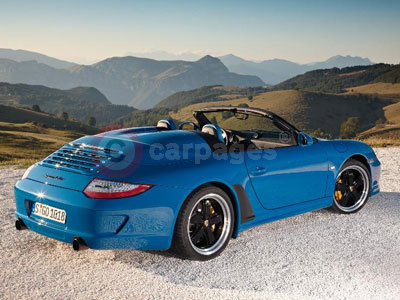 It may not be cheap at a little over £144k but the new Porsche 356 Speedster goes on sale in January 2011. But you better be quick as the production run is limited to 356.

First used on the classic 356 model of 1953, the Speedster quickly became synonymous with low-slung, open-top, two-seater Porsche sports cars that attracted free-spirited driving enthusiasts seeking the ultimate ‘wind in the hair’ experience. Now, in celebration of the Speedster legend, Porsche is introducing a new 911 Speedster at the Paris Salon on 2nd October 2010.

Designed and conceived by the Porsche Exclusive department in Stuttgart, the two-seater 911 Speedster is significantly different from the other members of the 911 family. Every Porsche Speedster was traditionally distinguished by its shortened windscreen and sleek tail, and the new 911 likewise features a 60mm lowered and raked windscreen and the characteristic ‘double-bubble’ hardcover for the manual soft top.

The profile of the new 911 Speedster is further defined by the use of the Carrera 4 body, the 44 millimetre wider rear stance of which additionally gives powerful visual emphasis to the rear wheel-drive configuration of the car.

Just as the style of the new 911 Speedster features contemporary re-interpretations of classic Porsche Speedster iconography, the characteristic rear-engined chassis features the best from the current 911 generation. The 3.8-litre flat six has been tuned to deliver 408 hp (300 kW), 23 hp more than in the 911 Carrera S. With average fuel consumption of 27.43 mpg (10.3 litres/100 km) (NEDC), the new Speedster uses no more fuel than the standard 911 Carrera S Cabriolet – a consequence of Porsche Intelligent Performance2.

The 911 Speedster features as standard a seven-speed Porsche Doppelkupplungsgetriebe (PDK) gearbox which transmits power via a limited slip differential to the rear axle, which lends further finesse to the chassis dynamics. Porsche Active Suspension Management (PASM) and Porsche Ceramic Composite Brakes (PCCB) are also standard. Added to this is exemplary protection for the driver and passenger, with the safety roll-over protection system, which is standard in all open-top Porsche cars, being specifically tailored for the unique Speedster design.

The conception of the current Speedster comes from Porsche Exclusive – the department of Porsche that specialises in individualisation of Porsche cars and low volume production. The 911 Speedster heralds the 25th anniversary of Porsche Exclusive which will be celebrated in 2011, and further demonstrates the competence of the in-house technical experts after the recent success of the 911 Sport Classic.

The 911 Speedster has a generous level of equipment as standard and, as is to be expected from the artisans at Porsche Exclusive, its appeal also comes from the meticulously hand-finished interior in black smooth-finish leather with numerous exterior colour painted details – each one bespoke to the Speedster. These include decorative designs with black and white patterns reminiscent of a chequered flag on the centre sections of the sports seats, and leather side bolsters in the exterior colour.

The sporting flavour is enhanced further by the ‘Pure Blue’ exterior colour that has been developed exclusively for the Speedster, and which provides an intriguing contrast with the tinted front lights, black headlight surrounds, black windscreen border and other black decorative designs. It also features a bespoke front spoiler, specific side-skirts and a distinct rear apron. Porsche fans will also note the colour-coordinated black stone guard ahead of the rear wheels, reminiscent of prior editions of the 911. Upon request, the Speedster is available in Carrara White, at no extra cost.

Fitted to every 911 Speedster is a Porsche Vehicle Tracking System (VTS), a sophisticated vehicle security package approved to Thatcham Category 5 standard, and customers will also be able to explore the potential of their new car by participating in a complimentary course at the Porsche Experience Centre, Silverstone.

Porsche 356 Images may not be UK specification cars. Colours and exterior and/or interior elements may differ from actual models.