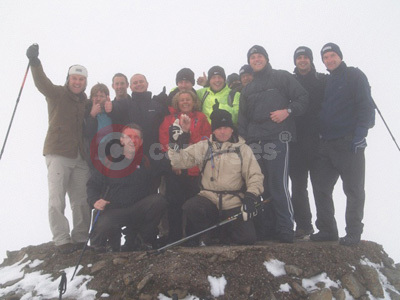 A team from Porsche Cars GB has proved they have the human stamina to match the horsepower of the world famous sports cars by successfully completing the Three Peaks Challenge - a test of endurance to scale the three highest mountains in the UK in 24 hours - in aid of Macmillan Cancer Support.

The team made an impressive sight as they drove up the length of the country in a fleet of cars headed by a Porsche Panamera. At 1700, the team began the climb to the top of the UK's highest mountain, Ben Nevis, in Scotland and reached the summit - 1344m above sea level - by the early afternoon.

Once down from Ben Nevis, the team was then driven to Scafell Pike in the Lake District, which at 978m is the highest peak in England. The ascent began in darkness at 0300, with the walkers acclimatizing their eyes to the twilight on the way. After successfully negotiating the challenging climbing conditions caused by loose rock and shale underfoot, the summit was reached.

With the hikers grateful for a comfortable seat in the cars, the team then headed to Mount Snowdon, the highest mountain in Wales (and England) at 1085m, and the final and most gruelling climb. With much relief and great personal satisfaction, the team reached the snow-capped summit of 'Yr Wyddfa' on Saturday afternoon - successfully accomplishing the Three Peaks Challenge.

With a sum approaching £7,000 pledged in donations so far, the Porsche team is looking to raise as much as possible.