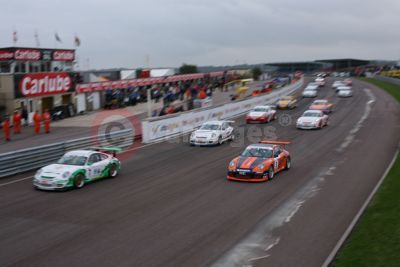 While Steven Kane won the race, James Sutton clinched the overall championship title in a thrilling final round of the Porsche Carrera Cup GB at Thruxton on Sunday 14th October 2007. Meanwhile, Nigel Rice was crowned pro-am champion after another fine victory in the category.

Kane (Northampton) took victory in round 19 at Thruxton on Saturday (13 October) to set up an enthralling three-way battle for the title in Sunday’s final round. However, it was Tim Harvey (Oxford) who took the chequered flag, only to be penalised 10 seconds and drop to fourth after a first lap incident.

The drama came on the opening lap as Sam Hancock (Clapham) led from Red Line Racing duo Harvey and James Sutton (Barnet). Into the left-hander at Cobb, the leading two cars touched and Hancock spun to the tail of the field. “It was just bunching, there was nothing I could do,” said Harvey. “I got a massive whack as I turned into Cobb,” said Hancock. “I thought I’d held it, but it just went round again.” In avoiding the spinning Hancock, Sutton had to jump on the brakes and flat-spotted a front tyre in the process, which would dramatically affect his speed as the race progressed.

Now it was Harvey leading from Sutton and Kane, but Sutton was starting to struggle and on lap 11 Kane was able to dive ahead under braking for the chicane. “I just couldn’t afford to brake too hard,” said Sutton as he slipped to third and soon came under pressure from Jon Barnes (Southampton).

As Kane challenged Harvey, the leading quartet ran in close formation for several laps as Michael Caine (Newmarket) came close to making it a five-car battle. But Sutton’s problems were deepening and he dropped down the order as Caine and Matt Griffin (London) moved ahead.

Though Kane chased Harvey all the way to the flag, the order remained unchanged, while Barnes stayed just out of reach of Caine. “I’d pushed really hard to get up to the leaders,” said Barnes, who had taken the best out of his tyres in the process and dropped away a little in the closing stages. He moved up to second place when Harvey was penalised.

Now the focus was on Sutton’s progress as he battled to limit the damage to his title bid. Losing a place to Jonny Kane in the Porsche Motorsport entry did not really matter, as the guest racer was not scoring points, but into the final laps the pro-am battle between Nigel Rice (Beverley) and Charles Bateman (Boston) came ever closer to Sutton. With Bateman becoming an ever bigger threat, Rice could not have afforded to sit behind Sutton, but the flag came out just in time to keep Sutton seventh on the road.

“It’s always an exciting ride here,” said Rice after moving closer to the pro-am title with another victory, with Bateman less than two seconds behind. “I managed to pull a lead out from Andy Britnell, but in the last five or six laps it was a real handful at Church,” reported Bateman. Britnell (Hildenborough, Kent) completed the pro-am podium, just ahead of Hancock. Having staged a mighty recovery drive, to get well into the top 10, Hancock dropped back to eleventh after losing the car’s front splitter at the chicane.

Heading into the 20th and final race of the season, three drivers were in strong contention for the title, with Sutton and Harvey narrowly leading the points from Kane. Starting from pole, Kane had the best chance to win the race and duly led all the way, but Harvey had stormed to third on the opening lap and then dived ahead of Barnes on lap four.

Harvey now set about hunting down Kane, and lap-by-lap the gap reduced. However, also on the move was Sutton and he was ahead of Barnes and into third place by lap five, having started seventh on the grid. Knowing that third place was enough to make him champion, Sutton then measured his pace as Harvey continued to chase Kane.

With five laps to go, Harvey was little more than a second behind Kane, but by now both drivers had asked a great deal of their tyres. On the final lap, Kane slowed still further and they were nose-to-tail into the chicane. On the dash to the line, Harvey pulled up almost alongside, but Kane got the verdict by 11-hundredths of a second. “I was really struggling for grip, but I just kept it going,” said Kane. Harvey, meanwhile, was hugely disappointed to have missed the title by just four points. “I just kept the pressure on and I could see Steven starting to struggle. I risked everything, even though I knew that a win wouldn’t be enough.”

The biggest celebrations were reserved for Sutton, who took third place and the 2007 Carrera Cup GB title. “That race seemed to go on forever,” said James on the podium. “I had a clear idea of the situation. It’s absolutely fantastic! But it’ll probably take a while to sink in.”

With Barnes making a pit stop to replace a detached front splitter, Caine clinched fourth place, but until the final lap it was Hancock in fourth after a tremendous drive through the field. Unfortunately, a rear puncture on the final lap cost him fourth, but his reward was being named the RAC ‘driver of the weekend’. The RAC ‘team of the weekend’ award went to Team Parker Racing.

A fabulous fifth overall was Rice after fighting ahead of Griffin and fending off pro-am rival Bateman. “It’s like a roller-coaster ride round here,” said Rice after his 12th pro-am win of the season secured the pro-am title. Out on the opening lap with gearbox problems went Britnell, while Pete Osborne (Worksop) completed the pro-am podium.