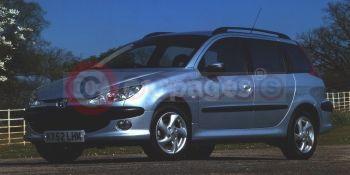 Peugeot new car sales in the UK went from strength to strength in 2002, echoing the rest of the UK car market, with a record total of 208,900 sales compared to the total market of 2,563,000. Peugeot secured an 8.15% market share, consolidating its position at number three in the manufacturers’ league table for the fifth consecutive year behind Ford and Vauxhall.

Sales of Peugeot LCVs reached a record high of 15,345 units, giving Peugeot a 6% market share. With a new Partner van introduced in late 2002, this figure is set to increase further in 2003.

The Peugeot 206 was the most successful Peugeot model in 2002, with sales passing 100,000 units for the first time since its launch in 1998. The 206 led the retail car market for the year, proving to be the number one choice for private buyers for the third consecutive year. It finished fourth overall in total sales.

The 206 model line-up increased in 2002 with the introduction of the 206 SW, a lifestyle estate variant. The much-anticipated 206 GTi 180 – a 180 bhp ‘pocket rocket’ – goes on sale in June 2003 to further strengthen the diversity of the 206 range. Both models are built exclusively at the PSA Peugeot Citroen manufacturing plant in Ryton near Coventry, for all international markets.

In its first full year of sales, the 307 represented over 58,000 units for Peugeot. In 2003, the introduction of the stylish 307 Coupé Cabriolet and the increasing success of the versatile and highly practical 307 SW and Estate models should boost sales of this growing range.

With diesel sales continuing to grow due to company car tax and ever improving refinement in diesel technology, Peugeot recorded a 12.7% market share. Total Peugeot diesel sales of over 76,000 units represented growth of 20% compared to 2001, largely thanks to the ever-broadening range of HDi diesel engines. Three Peugeot models featured in the diesel top ten for the year: 307 (4th), 206 (7th) and 406 (9th).