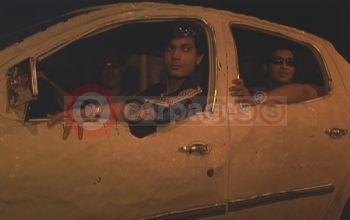 Peugeot’s current television advertisement for the 206 has finished in first place in an on-line poll, run by the BBC Radio 4 programme You and Yours, to find ‘The Nation’s Favourite Ads’.

The advertisement beat the other entries from a final shortlist of five well-known commercials of all time, voted for by listeners to Radio 4. It received 37% of all votes, with Famous Grouse finishing in second place with 32%, and the ‘Smash’ aliens ad finishing third with 12%.

The 206 advertisement, called ‘Sculptor’, provides a highly original, alternative approach to car advertising. Instead of showing beautiful scenery and driving shots, the commercial focuses on a car from the 1950s that gets ‘re-designed’, with the help of an elephant sitting on its bonnet, and turned into a 206 look-alike by a young man who dreams of owning one and impressing the girls. The feel-good factor at the end of the film reinforces the message that the 206 is the car to be seen in.

The film was shot in India and involved a casting session of 100 elephants to find the right one to play the starring role, and the music had to be specially composed to reflect a contemporary Indian feel.

John Goodman, marketing director at Peugeot, says: "The Peugeot 206 was the UK’s best selling retail car in 2002. All the positive feedback leads us to believe that the advertisement helped boost sales, and winning this award proves that thinking a bit differently is appreciated by television audiences. Now we just have to meet the challenge of creating further commercials that prove equally appealing to the television viewer."