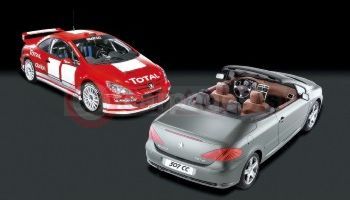 The Peugeot 307 Coupé Cabriolet has wowed the press and car-buying public since its launch in 2003 - and now its fearsome motorsport sibling is set to do the same in the titanic WRC arena.

The Monte Carlo rally is one of the world’s most historic motor sport events and is a true test for man and machine. It is therefore a fitting place for Peugeot’s new WRC contender to bare its teeth for the first time, in a bid to regain Peugeot’s leadership in a sport that has seen the firm win three consecutive titles in the last four years. This year, Peugeot’s two-time World Champion, Marcus Gronholm, will be joined by exciting Belgian driver ‘fast Freddy’ Loix.

The new car – based on the 307 CC – will replace the ultra-successful 206 WRC that has dominated the scene for so long. It features a number of technical innovations and features an all-aluminium 2.0-litre engine that develops up to 300 bhp at 5,250 rpm with 390 lb ft of torque at 3,500 rpm.

"However happy we may be with the way testing went over the winter, we are conscious that the 307 WRC is only at the beginning of its career and nothing can replace actual competition. That doesn't mean we will be in Monte Carlo just to make up the numbers though; Peugeot has its sights set on the world title at the end of the year and our drivers will be out to give it everything they've got. We'll see how it goes…"

On the road, the 307 CC has set a new standard for stylish, affordable wind-in-the-hair motoring. Combining the practicality of a full four-seat, fixed head coupé with all the glamour of a chic convertible, the 307 CC is creating the same buzz of excitement that its WRC brethren aim to produce on the track.

Peugeot 307 CC Images may not be UK specification cars. Colours and exterior and/or interior elements may differ from actual models.