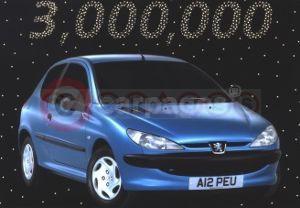 Today the three millionth Peugeot 206 will roll off the production line at the French manufacturing plant in Mulhouse, just four years after its launch.

Now Europe’s best selling car, the Peugeot 206 first went on sale in France in the summer of 1998, and hit UK dealer showrooms later that year. Launched originally in three and five door format, the 206 quickly became the small car to own, and is the fastest selling Peugeot vehicle ever to have been launched – even beating the highly popular 306. Building on its success, Peugeot added to the range with the stylish 206 Coupé Cabriolet in December 2000, and the 206 SW which went on sale in the UK in 2002. Peugeot will be adding to the range in 2003 with the introduction of its ‘pocket rocket’ the Peugeot 206 GTi 180, with 180bhp, which goes on sale in the summer.

The 206 has in recent years dominated the world rally stage, with Finnish driver Marcus Grönholm already triumphant in the 2002 World Rally Championship, and Peugeot winning the manufacturer’s title for an impressive third consecutive year. In Australia, Grönholm secured his fifth victory of the season, while Harri Rovanperä’s second place saw the Peugeot team score its ninth maximum points haul of the year.

The Peugeot 206 maintains its position as Britain’s best-selling retail car in 2002, with over 91,000 cars sold in total year to date. With 4.1% of total industry sales, the 206 has maintained its position as the third biggest selling car for the year.