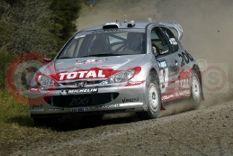 It was the fourth rally win of the 2002 season for Marcus Grönholm and his co-driver Timo Rautiainen who finished the final day leading the rest of the field by a comfortable margin of nearly four minutes. Rovanperä and his co-driver Voitto Silander finished second despite a hydraulic problem - almost 30 seconds ahead of third place former World Champion, Subaru driver Tommi Makinen. The superb 1-2 finish saw the French manufacturer score its eighth maximum points haul of the year.

Peugeot driver Gilles Panizzi finished in an excellent seventh overall on the Frenchman's first attempt at the tricky New Zealand stage with Britain's Richard Burns retiring on Saturday after he crashed out having pushed hard to retain his overnight lead over team-mate Grönholm.

Marcus said: "I'm very happy, of course. I don't know how this championship win* compares to the first one two years ago. Back then it was a fight to the last stage whereas this time, we've done it with two rounds remaining. I think the big thing this year has been that I have had a very good finishing record. Not counting the exclusion in Argentina, I've only retired from one rally and with the good speed of the 206 WRC as well, that's been enough for me to take good scores from almost all of the rallies. There are still two events remaining now and I don't have so much to go for now, but they're both rallies that I normally enjoy so I'm looking forward to them."

Peugeot Total Team Director Corrado Provera said: "I'm delighted for everyone in the whole team. We have scored throughout this season at a very high level, and this double win here is extraordinary. It's a fantastic result for a team and a company which are really committed to rallying and this championship."

Rally New Zealand saw Grönholm secure his fourth first place of the 2002 season, with his other triumphs in Sweden, Cyprus and Finland. His win sees the driver's crown return to Finland for the 12th time in the 25 year history of the Championship.

With both world titles* now assured, the Peugeot team can approach the final two rounds of the year in a more relaxed mood, but all of its regular drivers will be aiming to end the 2002 season on a high. Outgoing World Champion Richard Burns will be particularly determined to bounce back from his disappointment in New Zealand and will be battling for his debut victory for the Peugeot team at Rally Australia on 31 October-3 November.

* Subject to the official publication of the results by the F.I.A.