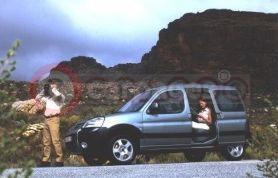 Peugeot is introducing an all-new Partner which has numerous styling enhancements including a newly styled front end, redesigned interior and uprated comfort and safety features.

The front end of the new Partner is completely redesigned to meet the needs of both a utility vehicle and the leisure market. Its new bonnet is more horizontal (raised by 40mm) and more ribbed to reinforce its robust appearance, while retaining the now familiar Peugeot feline 'look'.

The headlamps have been redesigned and now have clear polycarbonate lenses. The functions within the cluster are separated horizontally, and include indicator light, sidelights and main beam.

The new front wings have a slight camber around the wheel arch to blend in with the lines of the headlamps and bonnet.

The lower front bumper has been raised and its redesigned silhouette reinforces the appearance of solidity and protection, with the option for foglamps if not fitted as standard equipment.

All models are fitted with a five speed manual gearbox.

The suspension, brakes, steering, wheels and tyres have all been changed to ensure improved road-holding and comfort for both driver and passengers.

The new Partner offers three different suspension set-ups depending on its end use, and also the final country of destination.

The large front ventilated disc brakes are 266mm in diameter and 26mm thick for more efficient braking, while the rear drum brakes have a diameter of 228mm and a width of 40mm.

ABS can be equipped as an option on all versions. From 2003, XT and Ushuaïa Grand Raid models equipped with 1.6 litre and 2.0 HDi engines will be fitted with the electronic stability programme (ESP) and anti-skid (ASR) and emergency braking assistance (EBA) functions.

Power steering is standard across the range.

The 15" wheels already fitted to the current Ushuaïa version now equip the Partner from the XT version upwards on 1.6 litre and 2.0 litre HDi engine models equipped with two sliding side doors.

The new fascia panel has been designed to reflect the styling of current Peugeot cars, and storage space has also been increased.

As well as a front passenger airbag, on the passenger side the lower glove box can accommodate an A4 notebook horizontally. The actual glove box itself has air conditioning, to keep drinks and food cool on long journeys.

The central console between the two front seats has also been redesigned with a storage area to hold cassettes, CDs or other small objects. It features three bottle holders.

In front of the driver, the new 4-dial instrument panel has a rev counter on all petrol and diesel versions.

The four-spoke steering wheel is also new, and power steering is standard across the range.

On the driving column itself the driver operational controls have been taken directly from the 307 so that on certain models there is a radio stalk and also cruise control which is an option across the range.

The new Partner has new equipment and modifications relating to both safety and comfort.

The Partner has incorporated multiplexing since June 2000. The new Partner will use BSI (Built-in Systems Interface) technology which increases the number of functions to include:

All Combi versions of the new Partner are equipped with two sliding side doors and have traditional front seats which can be tilted for comfort. There is a 2/3 - 1/3 fold-down rear seat. Each rear seat is equipped with a retractable head restraint which can be lowered when not in use to improve rear vision.

A child seat can also be used in the Partner thanks to the inclusion of 'Isofix' anchoring points in the rear for the central and right hand seats.

A choice of 12 exterior colours is offered on the Partner range, five solid and seven metallic colours. Interior trim differs according to model type, with more conventional, youthful and leisure style trims available to suit the model type.

Please note that full details of the UK model line-up including specification and pricing will be announced at a later date.