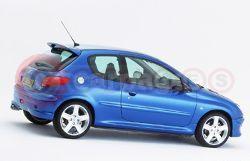 Peugeot kicked off Press Day at the 2002 British International Motor Show with good news for local jobs - and for thirsty journalists!

Celebrity chef Antony Worrell Thompson mashed up a range of tasty juices specially created in tribute to the star cars on Peugeot's stand, before handing over to Peugeot Motor Company managing director Tod Evans, who revealed that the French giant's Ryton plant, near Coventry, is going from strength to strength.

Production this year will hit 200,000 cars, and the forecast for next year is even rosier, with 230,000 vehicles expected to roll off the production lines. This will cement Peugeot's position as the UK's second biggest carmaker. Evans also announced details of a new shift at the plant that will generate 700 new jobs - a real boost to the Midlands' manufacturing sector.

The hugely successful 206 model is the cornerstone of the Ryton plant's success, and rally aces Marcus Grönholm and Briton Richard Burns were beamed in via video linkup from New Zealand to help unveil the latest - and potentially greatest - of the 206 range: the 206 GTi 180.

With a 2-litre 180bhp engine delivering a maximum of 140 mph, Peugeot feels the GTi 180 is a worthy successor to the legendary 205 1.9 GTi that redefined the hot hatch more than a decade before it.