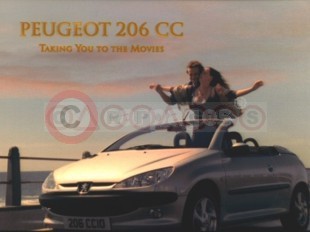 Peugeot is sponsoring ‘films on five’ this year in the channel’s biggest movie sponsorship to date.

The 12 idents have been produced by Peugeot’s advertising agency Euro RSCG Wnek Gosper. Inspired by Rutger Heuer in the 1980’s movie The Apparition, all are based on some of the most popular movies weaving famous scenes around a real life moment involving a car. Already broadcast have been ‘minuets’ based on the blockbusters Superman, American Beauty, Jurassic Park, Chitty Chitty Bang Bang, Close Encounters, The Exorcist, North by Northwest and Saturday Night Fever. The next four to ‘premier’ will be ET, Snow White, Titanic and From Here to Eternity.

Filmed in South Africa, the project took one week to complete. Stuart Douglas directed the shoot. Known for both film and photography, Douglas is recognised for his television commercials for Adidas, Coca Cola and Nike. He also works with celebrities such as Muhammed Ali, David Beckham, Prince Naseem, Richard Branson and Gary Lineker.

Nick McElwee, board account director at Euro RSCG Wnek Gosper says: "Peugeot advertising has always been epic and filmic, and sponsorship of ‘five’ movies is a natural progression of this. We wanted an idea that could capture the Peugeot brand honestly and imaginatively, and that could put the Peugeot Lion’s paws all over movies on ‘five’."

Jon Goodman, marketing director at Peugeot says: "With a range of 14 products to communicate to the public, we decided that television sponsorship was an excellent alternative to traditional TV advertising, giving us the scope and opportunity to promote the whole of our range, rather than just three or four key models.

"Positioning and branding are key for Peugeot, and with the media becoming increasingly diverse we are always looking for different ways of promoting our cars. The ‘five’ sponsorship has already been a success with viewing figures continuing to increase, averaging between two and four million viewers per film."