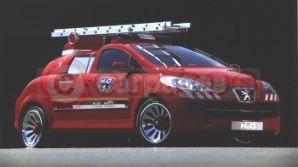 With Mondial Paris being Peugeot's 'home' motor show, the company is really 'putting on the style' with hot hatches, concept cars and its very own fire engine - the H2O.

Six concept cars are being exhibited - the 3Y 7 CC, Sésame, H2O, 607 Pescarolo, RC Spades and RC Diamonds - alongside forty-one other vehicles representing the Peugeot range, all of which encapsulate the true spirit of Peugeot: style, dynamism and innovation.

All vehicles will be displayed on Peugeot's massive 4,000m� stand, which follows a 'green' theme, using natural materials with abundant greenery, fountains, waterfalls and pools.

With World Rally Championship driver and manufacturer success again beckoning in 2002 after the accolade of finishing 2000 and 2001 with the manufacturers' title, Peugeot is introducing a new GTi to its 206 sporting stable.

Key styling elements are: colour coded bodywork, 17" alloy wheels, rear spoiler, and a twin chrome exhaust. Inside, racing style sports seats hug the driver and passengers both in the front and in the rear. The instrument panel has black dials with chrome surrounds, and the interior is further enhanced by an aluminium gear knob and pedals.

The 206 GTi 180 will go on sale in the UK in January 2003. Full specification and pricing details will be announced nearer the time.

As International Car of the Year, the 307 range of hatchback, SW and Estate will be on display, with the new 3Y 7 CC concept stealing the limelight in this line-up. The 3Y 7 CC offers a genuine coupé and cabriolet with seating for four adults.

The 3Y 7 CC retains the wheelbase of the 307 hatchback to provide a generous level of accommodation, and has distinctive exterior and interior styling. Like the 206 CC, the 3Y 7 CC has an electrically powered folding steel roof which takes just seconds to operate and automatically stores itself in the boot.

The Sésame is a small 'B' segment urban concept car which offers passengers both practical and pleasurable driving.

Its main features are the two electric sliding side doors - a world first on a vehicle of this type - which give the vehicle a degree of practicality unrivalled in its segment as it ensures easy access in tight parking spaces to all four seats. The Sésame incorporates a large glazed surface area due to its large windscreen and heat reflecting athermic glass roof, which creates a light and airy feel to the interior.

With 17" alloy wheels and short front bonnet, the Sésame retains the same feline front end of the 206 and 307.

The Peugeot H2O is, as its name suggests, a concept vehicle based on a water theme. Using a fuel cell (PAC*) to operate, the H2O is a completely environmentally friendly fire engine, with the only by-product of the fuel cell being water.

The fuel cell works by hydrogen and oxygen coming into contact and causing a chemical reaction which triggers a displacement of electrons; this simultaneously produces water, heat and electricity which then drives the vehicle.

Based on the Taxi PAC concept car unveiled in June 2001, and subsequently shown at Frankfurt that year, this new concept differs in that it can generate fuel in real time, at the request of the cell. If fighting a fire in a smoke-filled environment where there is no oxygen, the oxygen requirement for operation of the fuel cell is drawn from an on-board tank. Breathing apparatus is also on-board to safeguard occupants.

* PAC = pile à combustible, which is the French term for a fuel cell

Complementing the three 607 saloons which will be on display is the 607 Pescarolo concept which has been designed to reflect a sporty image for this executive saloon. Key differences are the increase in surface area of the air inlet on the front skirt allowing the engine to breathe more efficiently, the wings which extend by 25 mm, and the body lowered by 25 mm to give the car greater road-holding ability. Together with 19" alloy wheels and separate twin exhaust pipes, the Pescarolo is an impressive sight. Inside it has a leather interior with contrasting stitching to match the sporting style of the saloon. This 607 could be adapted to take the V6 engine as used in the C60 Pescarolo Sport at the 24 hour Le Mans race, and would provide a maximum power output of over 400 bhp.

The two widely acclaimed 2 + 2 sporting coupés, RC Spades and RC Diamonds were first shown at Geneva in March this year. These two concepts are identical in terms of interior and exterior styling set apart only by their colour - one being red, the other black - and their engines - one petrol, one diesel.

The RC Spades is powered by the 2.0 litre petrol engine, which features in the
206 GTi 180, while the RC Diamonds is powered by the 2.2 litre HDi FAP engine found in the 607, 406 and Coupé, upgraded in this instance to produce 175 bhp, but still maintaining moderate fuel consumption and very low CO2 emissions.

The new Peugeot Partner has been completely restyled and goes on sale in the UK at the end of the year. In order to reflect the needs of today's operators, this new Partner has a redesigned front end, featuring new larger headlamps and new front wings with wider contours around the wheel arches. A new lower front bumper and new grille complete the look.

Inside the fascia panel has been revamped to provide increased storage space, as well as housing the telematics functions, which are all located within a curved central panel to give the vehicle a more modern feel.

Four versions of the 807 which goes on sale in the UK in January 2003, will be on display. Designed as the next generation people carrier, the 807's main benefits are its safety and practicality and equipment levels which all make it THE new family car. Particularly innovative are its electric sliding doors for easy access, foldable seven-seat layout and curtain safety airbags protecting occupants in all three rows, a first for an MPV.

Following on from the success of the Design Competition in 2000, Peugeot will be inviting visitors to the stand and Internet users around the world to design a stylish retro-futuristic Peugeot vehicle. A full-scale model of the winning project will be built. The winning entry in 2000 was the Moonster project designed by a young Yugoslav design student, Marko Lukovic.

Peugeot has a separate stand to display 19 of its LCVs to include the new Boxer, Partner and Expert ranges.