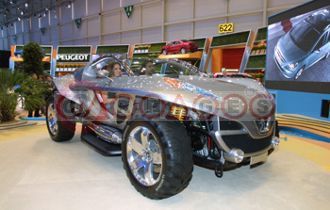 It is powered by not one, but two HDi diesel engines, one at the front and one at the back, with Peugeot's own particulate filter that cuts emissions to a minimum.

The combined power output is around 360 bhp and the two motors generate a phenomenal amount of torque of 800 Nm (590 lb/ft).

The two-seater is less than four metres long, two metres wide and stands just 1.48 metres high. Although this is one concept that will not go into production, it does give clues to the thinking of Peugeot’s design team.

Gull-wing doors give access to a high-tech interior that mixes aluminium with leather – and there are two central dials indicating the speed of each engine.

A touch screen connects to a PC which controls the satellite navigation system, speedometer and inclinometer when tackling the dunes.

But, just to prove that concepts can be turned into reality, Peugeot's 307 CC also made its debut here in full production form.

The 307 CC was first seen as a concept at last autumn's Paris motor show. When it goes on sale, it will be the first four-seater convertible in its class with an electrically operated steel top. The retractable roof is stored automatically in the boot.

Rear seats have been specially adapted to make sure that passengers have ample shoulder room, answering criticism of the 206CC that the retractable roof turned it into no more than a two-seater.

The 307 CC will go on sale in the UK – Europe’s largest cabriolet market -- in late summer following its launch on mainland Europe. It will be available initially with a choice of two 2.0 litre engines, one producing 138 bhp and the other 180 bhp.

UK prices are predicted to be between £18,500 and £19,000 – and there’s every chance that the 307CC could be fitted with a diesel engine with dealers in the UK in particular keen to cash in on the current diesel boom.

The 307CC is 14 cms longer than the standard car, all that length added at the rear, while the cabin has been totally reworked to make sure that four people can sit in comfort.